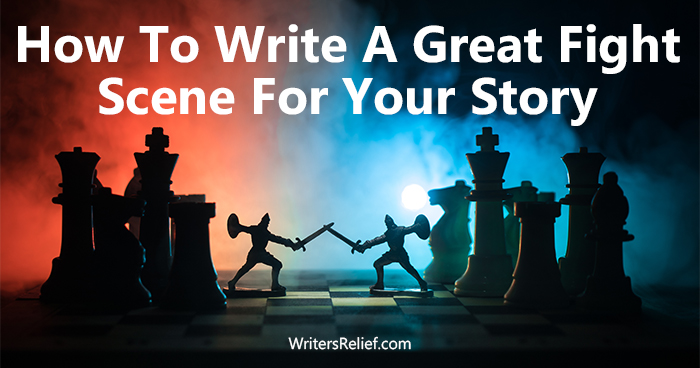 Okay, it’s time to fight! Of course, we’re talking about writing a fight scene in your short story or novel (why were you putting on boxing gloves?). At Writer’s Relief, we know creating a realistic fight scene that also moves the story forward isn’t easy. Fortunately, our writers here have some tips that really pack a punch! Here’s how to write a great fight scene for your story or book.

How To Write A Fight Scene With Impact

Determine why your characters are fighting. Before the brawling starts, make sure you’ve set the groundwork and have a convincing reason for the characters to come to blows. What events led up to this conflict? Have the characters met before? Do they have a long-standing dispute? A fight between strangers is different than a fight between characters who have a history together. You need to set the stakes and make sure your reader is invested in the outcome before the fight scene begins. You might want to make sure the characters have said all they need to say before resorting to violence: Once the fighting breaks out, you won’t want to slow down the action with lots of dialogue.

Consider the surroundings. Use your story’s environment when you write a fight scene. Where are your characters fighting? Take into account all of the possible dangers and tactical advantages a given setting offers. If a fight breaks out in a bakery, will the combatants parry with long loaves of Italian bread, or knock over racks of cooling doughnuts? Having that same fight occur in a museum display of swords and mallets ramps up the danger and invites a more violent outcome. By bringing in elements and obstacles specific to the location, you’ll make your fight scene more engaging for the reader.

Engage all the senses to bring your readers into the fight scene. Sure, a character will feel the impact of any blows. But does the air smell of saltwater? Are police sirens blaring in the distance and getting closer? Does the protagonist see a street sign as she stumbles off the curb? Can the character in a barfight taste blood and alcohol?

If your protagonist is a couch potato, odds are that character isn’t also a Krav Maga expert who can easily disarm an opponent. However, if you are going to present such a glaring discrepancy between fighting ability and presumed skills or personality, it should be explained and supported by the plot: the couch potato is ex-secret military, or the geeky high school kid with excellent sword skills is a vampire slayer by night. Otherwise, you could derail your story and bring your reader out of the action.

Have the damage be realistic to the characters and the world. Have a realistic outcome. Be familiar with your genre and the levels of damage that are believable for the types of characters you are writing. If you’re writing sci fi or horror, your alien or supernatural character might be able to withstand an unusual number of injuries. But if you’re writing a romance or novel about average humans and the jilted lover punches someone in the face, there should be a sore jaw, cut lip, or black eye, and the injuries sustained should match the force of impact.

Don’t drag out the fight scene. Your fight scene should always serve the purpose of moving the story forward. Consider writing in short sentences to mimic the fast, kinetic pace of the action. And unless you’re writing about an epic battle, keep the fight brief. You don’t need to detail every punch. You can include how an opponent didn’t block a roundhouse kick, or describe a character’s clenched fists so a reader can visualize and imagine what is happening, but keep it short—edit out unnecessary words and descriptions.

By following these writing tips, you’ll be able to create a fight scene that keeps your readers’ attention, is integral to the plot, and doesn’t slow the pace of the story. And when editors and agents think your writing’s a knockout, you’ll boost your odds of being a winner in the fight to get published!

Question: Do you find fight scenes easy to write or difficult?