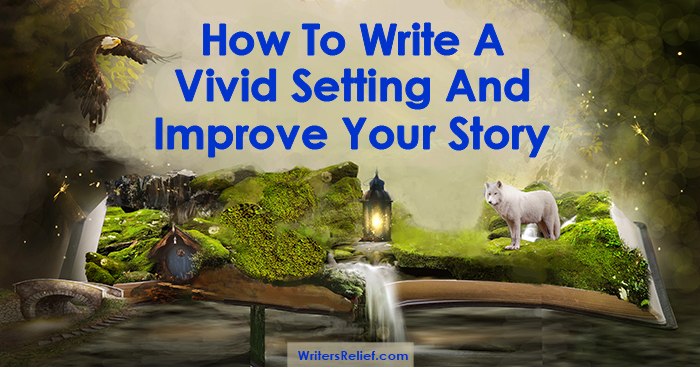 When you write the setting of your short story or novel, you usually include the obvious details: the time period and physical location in which your characters exist. However, at Writer’s Relief, we know that setting can be more than just a pretty backdrop. A vivid setting is capable of holding influence over character and plot and can be used as a tool to improve your story and enhance your writing.

Write A Setting That Will Improve Your Entire Story

Grounding your story in a vivid, easy-to-see setting will help engage your readers. Let’s set the scene. Say the main character of your story is a middle-aged White woman living in modern-day California. She would have an entirely different experience if you threw her into eighteenth-century London. The same could be said if your character was, instead, a twenty-year-old Asian man with a disability. Here are some ways you can use setting and scene to bring your story to life.

#1. Write the setting so that it emphasizes action and contrast: Maybe two close friends have a tense fight at a birthday party. Or a murder victim is found in a pretty rose garden. The same can be done for more pleasant situations—a man happily reunites with his previously missing daughter in a chaotic train station.

#2. Place a pivotal moment in an everyday setting: A man finds out that his mother was killed while he’s on a date that was going really well. Or, a couple who have been trying to have a baby realize that they’re pregnant at the DMV.

#3. Let the weather serve as a contrast to the plot: A woman is being chased through the park by a killer on a beautiful, sunny day. Or while the sky outside is dark and overcast, a man on trial for a crime he was falsely accused of is found innocent.

#4. Craft a metaphor: Perhaps a young woman decides to leave the tiny, cramped apartment she shares with her toxic partner. She takes what few things she has and moves to an empty, new apartment. It may not be bigger, but now she has the space to be her own true self and spread her wings.

#5. Set the mood for the scene: A woman who just suffered a miscarriage looks out the window and sees an empty playground. Or a high school student sitting alone at the dinner table reads a rejection letter from his dream college.

#6. Use the background to emphasize your character’s emotions—show, don’t tell, for stronger impact: If your character is grieving the tragic death of a loved one, consider placing them somewhere happy and lively to contrast how they’re feeling. Or you can reinforce the sad, left-behind sensation by placing them in a quiet setting filled with memories.

#7. Allow your characters’ surroundings to complement and reveal their feelings. A young man traveling abroad hears his mother’s favorite song on the radio and realizes he’s homesick. Or, a woman sees someone tangled in the leash of an overly energetic Chihuahua and remembers why she doesn’t have a dog.

These writing tips are just a few of the many ways writers can use setting to their advantage. A vivid setting can help you enhance the characters, plot, or theme of any story, no matter the length or genre—as well as boost your odds of getting published!

QUESTION: How have you used setting to enhance your writing?