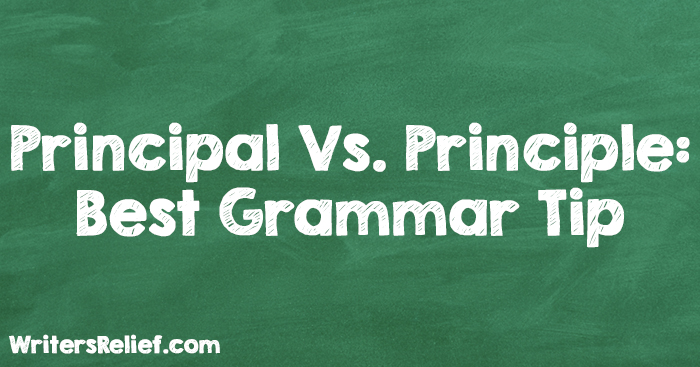 Welcome to Writer’s Relief Grammar School! Even if it’s been a while since you’ve sat in a classroom, you’re never too old for the grammar tips we’ll review. So if you haven’t already dropped off your virtual enrollment papers, please report immediately to the office of the person who runs the school. You know—the administrator who makes all the morning announcements and hands out detention slips. Hmmm…is it the principle or the principal?

Knowing whether to use principal or principle can be the difference between keeping your readers’ attention on your story or poem—or creating a disconnect that results in social media shaming and a seat outside the head grammar guru’s office while you wait for your name to be called. But before we go any further, it wouldn’t be school without a pop quiz!

Choose the correct answer in the following examples:

For the first example, the best advice is what the teachers gave you in grade school: The principal is your “pal.” Therefore, the correct answer is A. When you are referring to “the person who runs the school,” principal is the correct word to use.

In the second example, our word-in-question is being used in a financial sense. In this instance, principal refers to the original loan amount before interest, penalties, etc., are added. So, in Example 2, the correct answer is also A.

Now let’s look at Example 3. You might have noticed in the previous two examples, we used principal as a noun. Based upon this, one might assume that principal is only ever used as a noun and, therefore, principle must only ever be used as an adjective. Sorry if we tricked you! In fact, of the two homophones, principle is the only one used solely as a noun. Principal, in contrast, can be used as either a noun or an adjective. In its adjective form, principal means “main” or “primary.” In this example, we are using the word as an adjective, so the correct answer would yet again be A.

Not that we want to spoil the big surprise right off the bat, but Example 4 shows principle used in its proper context. Principle is defined as being either a held moral belief or a general or legal rule. Whether we are discussing the principles of bioengineering or agreeing with somebody in principle, this is the homophone we use. Now that we know this, we see that B is the correct answer to this example.

If you remember that, for the most part, principle is a noun that refers to moral, general, or legal rules, and principal is used otherwise, you’re well on your way to becoming a better writer. Your grade school teachers may have also taught you that “the principal has his principles.” This is another great and easy way to remember the difference between these two very troublesome words, which sound alike but are, in fact, very different. And knowing this important difference may save you from having to write one hundred times: I must not use principle when I mean to say principal—or vice versa! Now off you go to enjoy recess: it’s Taco Tuesday!

Check out our other grammar tips articles:

When To Use Among Or Between

When To Use Less Vs. Fewer

En Or Em Or Maybe Hyphen: Keeping Up With The Dashes

Question: What other homophones do you find are often confused?