Grammar Tip: When To Use Less Vs. Fewer | Writer’s Relief 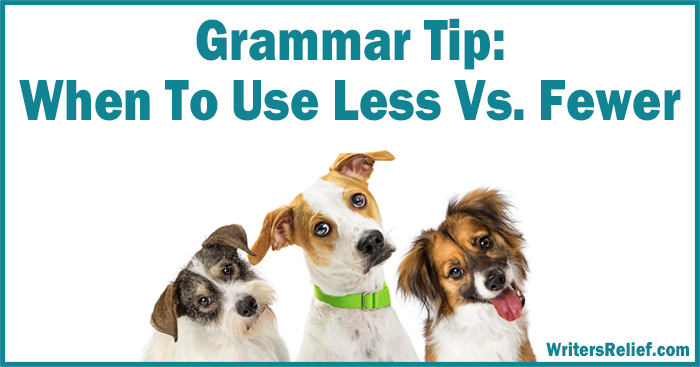 While English is a wonderful language, it can also be confusing! Sometimes, it can be difficult to determine when to use certain words over others. For example: When should you use less versus fewer? Writer’s Relief offers some grammar tips for writing to help you distinguish the difference between less and fewer and easily choose the correct word at a glance.

Less Or Fewer: Which Is Correct?

Fewer should be used when the noun you are describing is quantifiable; that is, can be separated into individual pieces and counted. For example:

I’d rather have fewer chicken nuggets, for while they are the most delicious variant of chicken, I am on a diet, and they would go right to my thighs.

In contrast, less should be used for instances when the noun you are describing is a singular mass noun; that is, things that cannot be divided from the whole. For example:

I’d rather have less gravy on my mashed potatoes, for while it is the most delicious way to eat this variant of potatoes, I am on a diet, and it would go right to my thighs.

Sentences like these may disappoint your grandmother (are you eating okay, dearie?), but they will certainly delight the members of your literary family—the word nerds who pride themselves on their grammatical prowess. Like the multitalented Hugh Jackman, who can sing and act at the same time, here’s an example that employs both fewer and less simultaneously:

If your boss gave you fewer dollars than your coworker, you would have less money than she does. (And that means you’ll chip in for fewer office parties, which will cut into your doughnut consumption—which is the most delicious variant of dough.)

Interesting side note (at least to those of us who find this sort of thing interesting): Some nouns, like “time” or “money,” can actually be counted in minutes and hours or dollars and cents. But it is customary to treat these as bulk quantities rather than collections of dollars or minutes. So you would use less rather than fewer.

Also, when referring to a number of items, or fewer would be correct, but or less is more commonly used. For example:

Tell us how this grammar rule drives you nuts in fifty words or less.

Because the checkout line at the supermarket was limited to ten items or less, Joey had to put back the lawn chair and ramen noodles he had in his cart.

How are you doing so far? What’s that? You want fewer English grammatical rules? Sorry, but as a writer, you’ll have to follow the rules just like the rest of us. Unless you write experimental fiction. Then you can just take the tips in this article, toss them out of an M.C. Escher window, and go back to writing. But for the rest of us, here are some additional caveats:

Less should also be used for abstract nouns: words like “love” or “honesty” that are probably best described as “nebulous.” We can’t see them and, therefore, they can’t be counted. Want to know an easy way to determine if a noun is countable or uncountable? See if you can make it plural. Honesties? Courages? Here’s an example:

I have much less courage than the Spider-Man stunt double, Greg Townley, but slightly more courage than that anthropomorphic lion from The Wizard of Oz.

In addition, less can be used to modify adjectives instead of nouns. Let’s edit the above sentence to illustrate this:

I’m much less courageous than Greg Townley, undercover star of Spider-Man, Far From Home, but slightly more courageous than Bert Lahr, who plays the lion in that movie with the Munchkins.

Does all that make sense? To make a long grammar lesson short: If you can count it, use fewer. If it’s all lumped in together, use less. But why make this lesson short when the grammar geeks here at Writer’s Relief live for these opportunities to talk shop? So let’s continue…

Want more examples to help clarify this concept? Of course! You would have less heat but fewer fires, less traffic but fewer cars, less ice cream but—wait, there should never be less ice cream.

Now, see if you can ace this quiz:

Well, how did you do? We hope our grammar tips helped you answer each one correctly. And no, we’re not giving you the answers, but we will give you a hint: One is a bit sneaky!

Eager to learn more grammar tips and tricks? Check out this article, which explains the grammatical conundrum that baffles even the savviest of wordsmiths: the differences between “lie” and “lay.” And if you love reading about the ins and outs of proper grammar, you’ll absolutely adore our Free Grammar and Usage Tool Kit.

Question: What are your biggest grammar pet peeves?