Grammar Tip: When To Use Among Or Between | Writer’s Relief 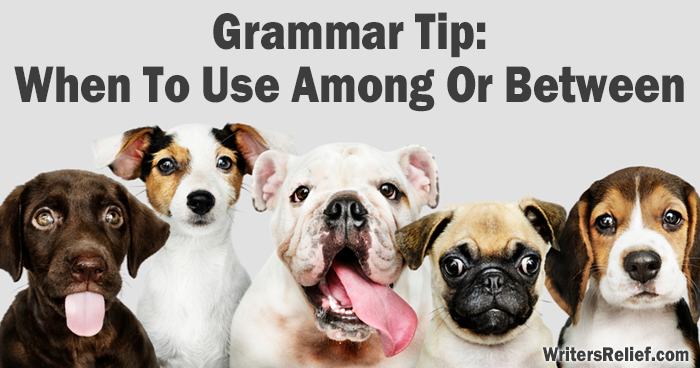 At Writer’s Relief, we understand how important it is to use the right word for the job. But it’s not always easy to know which word IS the right one! Knowing whether to use among or between can be a challenge for even the most skillful writers. So if you find yourself scratching your head and wondering about the difference between among and between, don’t worry: You’re among friends, and we’ll keep it between you and our blog. (See what we did there?)

Here are some easy-to-follow grammar tips to help you choose the right word when you write.

Among Vs. Between: Which Should You Use?

Which of the following is correct?

Confused? Here’s our advice: Forget everything you may have learned in grade school and read on!

Many of us were taught that it’s a matter of count: You use between if discussing two options and among if discussing three or more. Well, there’s a little bit more to it than this!

In the first example, some might guess that B is correct because you are discussing three options. However, when you are referencing three specific options, use between, not among:

The second example is a little trickier. When talking about groups of items, use among…EXCEPT when the group consists of only two individual members. In that instance, use between. (Just be careful with collective nouns in these cases.)

Using between in the sentence “Vince had a hard time choosing his favorite between his coworkers” implies that the group he is choosing from consists of only two individual members. Whereas using among suggests that more than two individual members are included within the group. If it’s not already established within context, it might be wise to clarify, as in “between his two coworkers” or “between his coworkers, Jack, Sarah, and Dave.”

Example number three shows us that, just to be even more confusing, between and among can also be used to determine location. While Moira traipses around in her garden, using between in the sentence suggests that she is navigating a walkway surrounded with plant growth…or perhaps that she is walking between two lonely plants that struggle to grow within her sad little garden. The use of among in the sentence portrays Moira as wandering around her lush garden filled with prizewinning roses. So in this case, it’s really about how you want cape-wearing Moira to be portrayed. Good gardener superhero or bad gardener villain?

As you can see, there is more than one way to properly use between and among. But if you keep in mind these grammar guidelines, it will be easier for you to decide which is correct.

If you have more grammar challenges, check out our Free Grammar and Usage Tool Kit.

Question: What other words are often confused?