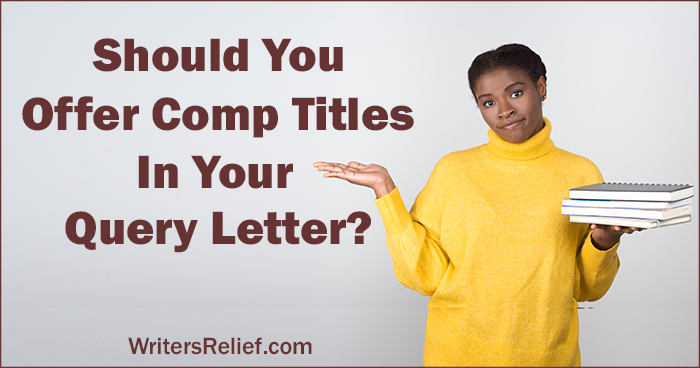 When your book manuscript is ready to be submitted to literary agents, an effective query letter can make the difference between successfully enticing an agent or having your submission tossed into the reject pile. While there are basics every query letter should have—intro sentence, engaging book blurb, author bio—many authors wonder about including comp titles as well. At Writer’s Relief, we have over twenty-six years of query letter writing experience (and we’ve helped hundreds of clients secure agents!). Here’s our take on whether offering comp titles in your query letter will have a positive effect on your odds of success—or a negative one.

Comp Titles In Your Query Letter: What You Need To Know

Comp titles—comparative titles—are published books that writers compare their own manuscripts to in a query letter.

The comp titles are meant to help potential agents get an idea of what your book is about and where it may fit into the market. Further down the line, comp titles can also be helpful in determining where and how to position your book for sales.

Usually a comp title in your query letter highlights how your book is similar to an already successful book and implies your book will be just as popular. Comp titles can also be a way to show how your book is similar yet different from well-known titles. You could mention two published books that are very different from each other, but still feature elements which appear in your manuscript. An example of this sort of mash-up would be: Stephen King’s It meets Calypso by David Sedaris (which would be one heck of a book!). This would definitely pique an agent’s interest by both playing off successful books yet also showing how yours is unique.

Before You Start Listing Comp Titles, Consider This…

Well-selected comp titles might help make your query letter more appealing to some literary agents, since these will instantly narrow down the potential audience for your book. But if you’re not careful about the comp titles you use, there’s the possibility these comparisons could do more harm than good!

If you compare your book to one that’s a famous best seller, every writer and their mother has most likely already made the comparison. After reading the umpteenth query letter gushing, My book is the next Da Vinci Code, literary agents are going to become numb and unimpressed. Ho hum…you and five hundred other writers. You don’t want literary agents to feel the book has already been written by someone else, and your manuscript is just more “been there, done that.”

On the other hand, comparing your book to one that is too obscure won’t make a positive impression on a literary agent either: My book will be the next Yachts on Fire! If the agent has never heard of the book, all you’ll create is puzzlement, not interest.

And one of the worst things you can do is mention a comp title that was a sales flop. If you’re going to compare your manuscript to a published book that you enjoyed or consider a literary masterpiece—be sure the sales numbers are good.

Another potential pitfall: The published book you compare to your manuscript could be one that the agent personally dislikes. If you compare your work to a book that the agent felt was overblown, or not well-written, or boring, or whatever—you’ve now just saddled your manuscript with the same impression, and the agent hasn’t read a single word yet. Since some literary agents request only a query letter first before they will request pages, what are the odds that the agent who dislikes your comp book will ask to see pages from you?

Using comp titles requires lots of thorough research and accuracy on your part. If you compare your book to a popular fast-paced thriller but it’s actually a gentle cozy mystery, the comparison will fall flat. Avoid trying to shoehorn your book into a comparison that just doesn’t fit. Literary agents will know that the audience and marketing potential for your book is nothing like the comp title you mentioned, and your credibility will be questioned.

You’ll also need to consider any possible confusion that could arise from a mash-up of two comp titles. When you state your book is Where the Crawdads Sing meets Interview with the Vampire, you might mean something very different than blood-sucking shellfish—but agents might possibly read it that way.

Also, keep in mind that the time between an agent representing a book and that book being published can be years. So if you’re using a comp title that’s trending right now, literary agents may assume your manuscript’s topic is already behind the curve.

Choosing To Use Comp Titles In Your Query Letter

To steer clear of the various potential problems with comp titles, our letter-writing experts typically avoid using them and prefer to focus on crafting a well-written, engaging book summary that will make agents interested in YOUR book and you. Ultimately, your manuscript should be able to stand on its own merits, rather than ride the coattails of another author’s book. At Writer’s Relief, our letter experts have written thousands of query letters without including comp titles, and many have captured the attention of literary agents and resulted in contracts.

However, if you feel strongly about including comp titles and you’ve done your research—go for it. Ask your beta readers to tell you which published books they feel yours is most like to see if your readers agree with your assessment.

Question: What comp titles would you compare to your writing?

Congratulations, writer—you’ve finished your book manuscript! You’ve had it professionally proofed and edited, and your beta readers gave you great reviews. Now it’s time to write your query letter. Sometimes, even the most gifted writers may feel the query letter is more challenging to write than the novel. But in order to score a literary… END_OF_DOCUMENT_TOKEN_TO_BE_REPLACED

It’s a task that strikes fear in the hearts of even the bravest, most experienced writers: creating an effective query letter. The hair-raising stress of determining what to include and what to leave out can make you feel like a sleep-deprived zombie. Make the wrong choices and literary agents may cringe and toss your query… END_OF_DOCUMENT_TOKEN_TO_BE_REPLACED

Pinpointing the genre of your novel can be almost as difficult as writing it—especially if you’ve bent or blended some genres. But at Writer’s Relief, we know that defining the genre of your book is an important element of a successful query letter. Genre tells a literary agent exactly what to expect from your book… END_OF_DOCUMENT_TOKEN_TO_BE_REPLACED

Ensemble cast books—stories featuring plotlines that follow multiple characters—offer a scope and depth that make the narrative structure attractive to writers and readers alike. But summarizing an ensemble cast story in a query letter presents special challenges. Fortunately, Writer’s Relief knows the genre essentials—and a few tricks of the trade—that will help you write the… END_OF_DOCUMENT_TOKEN_TO_BE_REPLACED