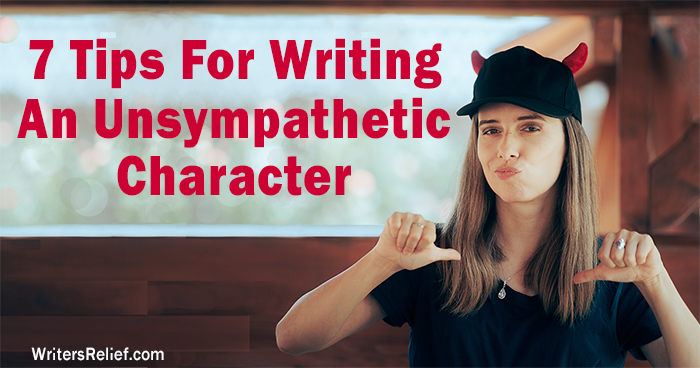 Unsympathetic characters are a great way to add conflict and tension to a story. They’re also more realistic, since not everyone in the world is relatable or likable! Your unsympathetic characters could also be a way to show behavior that’s not condoned, like Humbert Humbert in Lolita, or may give your readers someone to cheer for as the character grows and changes over the course of the story (we’re looking at you, Severus Snape!). These traits and actions will make it harder for your audience to initially relate to your character:

Unrelatable background. Creating characters with unrelatable backgrounds is one of the simplest ways to make it more difficult for your readers to feel a connection. Maybe your character grew up filthy rich and spoiled, or perhaps your protagonist was raised by selfish, manipulative people with a warped sense of the world and reality. These details shouldn’t be immediately revealed to your readers.

Allowing your characters to act in ways that seem unkind or illogical without explaining the motivation for their actions will make them unsympathetic and unrelatable. As the story progresses, you can reveal some of the reasons for their behavior. The explanation may not redeem them, but it will help readers better understand and relate to those characters as the story progresses.

Lack self-awareness or introspection. If a character repeatedly does something without realizing how it affects others or themselves, readers will have a harder time empathizing with that character. For example, Jane Austen’s Emma lacks the self-awareness to realize the consequences of her actions. Emma is convinced she knows best—no matter what the other characters in the story think.

Self-aware—and still unlikable. You can make a character even more frustrating and unrelatable by providing self-awareness. In this case, the character does realize the consequences, but chooses to justify and continue the troublesome behavior. It’s hard to sympathize with someone who makes mistakes, yet continues to rationalize those mistakes rather than learn from them. This can also circle back to motivations stemming from the character’s unrelatable background or perspective.

This trait might seem limited to villains, but it can also afflict a protagonist. In The Paradox Hotel by Rob Hart, Detective January Cole is antagonistic, disrespectful, a major pain in the butt to both friends and enemies—and the protagonist of the story.

Questionable motives. Giving your character an unrelatable motive will immediately put them at odds with your readers (and probably most of the other characters—a great source of tension!). Maybe your character wants to wipe out the whole planet, or their goal in life is to acquire something most people don’t strive for (this could be a concrete item or a more abstract goal). Keep in mind that unrelatable doesn’t necessarily mean evil. In fact, villains can be some of the most relatable characters in the story! The goal isn’t to make your unsympathetic character evil—it’s to make them appear unrelatable to your reader.

Cruel, selfish, illogical actions. These can be big or small actions that would seem unrelatable to most of society. For example: Your audience will empathize with a character who lashes out when angry, upset, or threatened—but what about a character who appears to be none of those things, yet still acts cruelly or thoughtlessly? The character might also cross social taboos or be willing to toss aside something most people would consider irreplaceable or very important. You can decide if you want to provide an explanation for these actions later in the story.

Being hoisted by their own petard. This quote from Shakespeare roughly translates as the poetic justice of being blown up by their own bomb. Often when characters suffer, we feel for them. But if your characters suffer directly because of their own bad choices, it’s harder for readers to sympathize. When the bad-mannered children in Roald Dahl’s Charlie and the Chocolate Factory get their somewhat grisly comeuppances and are stretched, shrunk, or swelled up and blue, most readers are unsympathetic and feel they get what they deserve.

Lots of character flaws—or none. Flaws help a character seem more realistic and relatable. If you want a character to be unsympathetic, you can either go heavy on the flaws, or eliminate all of them. It’s difficult to identify with people who have no flaws or who are made up only of flaws, because those two extremes don’t exist in the world. Readers especially won’t identify with a perfect, flawless character who wins every battle, easily solves every mystery, constantly saves the day, and never has a hair out of place.

Having an unsympathetic character in your story or novel will help keep your readers’ attention and move your plot forward. With these tips, you’ll be able to choose the best way to make your character unsympathetic and ramp up the tension. As your story progresses, you may choose to reveal the basis for their attitude or actions in order to make them a bit more sympathetic.

Question: What character in literature do you consider unsympathetic?