Character Archetypes From A To Z | Writer’s Relief 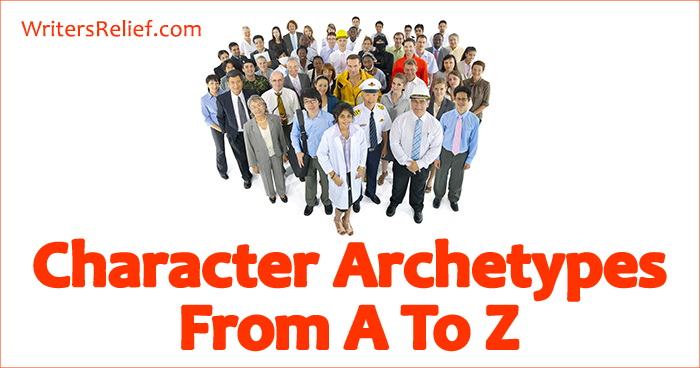 From classic literature to comic books, perceptive readers will notice that even the most unique characters can fit into familiar molds. The characters in short stories, graphic novels, and novels are often based on archetypes—characters who represent a universal trait or pattern. To help you with character development in your writing (and appreciation in your reading), the writers at Writer’s Relief (yes, we’re writers too!) assembled a list of the most identifiable and popular character archetypes from A to Z.

Character Archetypes For Every Letter Of The Alphabet

Antihero: A main character who doesn’t have stereotypical “heroic” qualities, like courage, strength, or idealism.

Backstabber: A so-called “friend” who betrays the story’s hero, usually in a shocking twist.

Comic Relief: The humorous character whose main purpose within the story is to provide readers with an amusing break, especially during moments of drama or tension.

Devotee: A character whose entire life and purpose revolve around another person or cause.

Everyperson: This character represents an ordinary person who’s just like most readers.

Frenemy: You love to hate them—and so does the hero! While the hero may treat this person like a friend, underneath the surface there’s a fundamental rivalry. Or it could be the reverse: enemies who deep down really admire each other.

Good Samaritan: A side character who steps in to do the right thing.

Hermit: Think Boo Radley here—often, the Hermit is an older man who lives alone and shifts unexpectedly from someone the protagonist fears to a counselor they respect.

Invasive Neighbor: This neighbor is a nosy, gossipy annoyance. You may have one of these in your real life as well as inside your book!

Jock: A frequent archetype in middle grade and young adult stories—a sports star who’s usually quite popular, but can also be a bully to more academic or klutzy students.

Logician: This side character is driven purely by logic and reason and may struggle with expressing or understanding emotion.

Mentor: Your main character’s experienced, trusted advisor. The mentor is often older and wiser than the hero. (Mentors can be helpful in your writing life as well!)

Nonconformist: This rebellious, iconoclastic character marches to the beat of their own drum (and might influence your hero to do the same!).

Outcast: A literary character who is often quite gifted, but whose gifts go unnoticed by other characters. The outcast never seems to “fit in” to any of your story’s cliques.

Puppeteer: The mysterious manipulator who is pulling all the strings behind the scenes. This character’s identity often creates a puzzle that drives the story forward!

Questioner: Someone who takes issue with the norms. Even when your hero is ready to blaze ahead, the Questioner has doubts.

Reluctant Hero: This character just wanted to live a normal, quiet life—but alas, they were destined to become the hero.

Star-crossed Lovers: Romeo, O, Romeo! These lovers, no matter how perfect for one another, are doomed by circumstances outside their control, like warring families or differing social classes.

Tyrant: The tyrant rules with an iron fist, and will stop at nothing to dominate anyone who stands in their way. Often, this is the character your hero strives to defeat.

Underdog: This is the character every reader will root for! An underdog is a competitor who, due to any various shortcomings, is thought to have little status or chance of victory.

Vigilante: Equipped with a fierce moral compass, this character takes justice into their own hands.

Workaholic: No matter what’s going on in their personal life—or what crises are unfolding around them—this character is always focused on only one thing: work.

eXplorer: An explorer is driven by wanderlust and can’t stay in one place for too long. This vagabond always wants to find new places and challenges.

Younger Sibling: Many great heroes have a younger sibling who’s often less mature and more naïve—someone our hero is constantly forced to protect (or chase after).

Zany Sidekick: This character, often quirkier and bolder than the protagonist, is in the story to drive our hero out of their comfort zone!