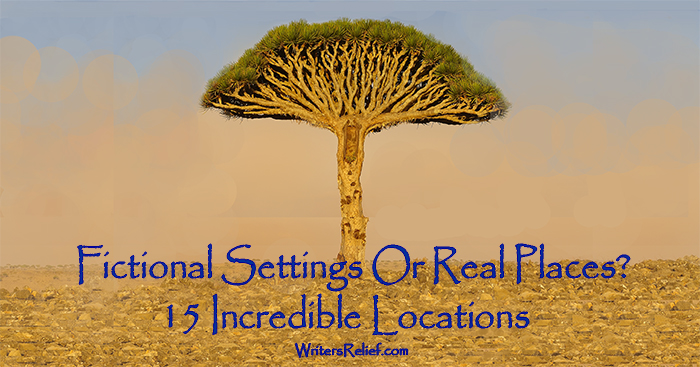 As any reader (and all the bookworms here at Writer’s Relief!) can tell you, a well-written book has the power to transport its audience to fantastic, new worlds. But what you might not realize is that the real world can be just as surprising and strange as a fictional setting—and sometimes even more so! To prove our point, we’ve put together a list of 15 incredible locations: Can you accurately identify which settings are real places that belong in a travel guide, and which you’d only find between the pages of a novel?

#1. This bank has an unusual method of keeping its clients’ wealth safe: bury it deep underground. A series of carts and trolleys lets the bank’s patrons access their vaults inside a network of underground tunnels. Of course, the bank employs more traditional security as well, such as state-of-the-art locks and armed security, but thieves will have a tough time robbing a cache several hundred feet below ground!

#2. This sprawling city has eschewed traditional burial practices in favor of a more macabre solution. When a major quarry near the city was shut down, the local government repurposed it into a mass grave for the dead. Now these tunnels feature lines of skulls and piles of bones laid to rest deep below the city. The tunnels stretch beneath a huge part of the metropolis—useful for any adventurers brave enough to disturb the dead.

#3. A seemingly bottomless hole marks the coastline here. The ocean pours endlessly into this cavernous maw and only reemerges in jets when a wave hits the well at the right angle. Surrounded by volcanic rock, this hole seems like it could be a passage straight to the center of the planet.

#4. Another network of caves and chasms, this place was once a mine for rare minerals. The natural fissure extends miles below the surface, but it was never properly excavated due to the fragility of the geodes waiting to be harvested. If you descend into the chasms, you may be lucky enough to find one of the remaining treasures.

#5. These mountains are unusually tall and narrow, resembling stone pillars more than ordinary mountains. A dense fog shrouds the bottom of the formations, leaving the peaks to rise above the mist like islands. Legend says that a rebel army was finally crushed here when its leader, for whom the mountains were named, fell to his death from the peaks.

#6. This series of revered graves is arranged in the shape of a five-pointed star in a remarkably clear section of a dense forest. A raised barrow sits at each point of the star and at each inner vertex, with an additional two raised in the center. The graves are marked by sets of stones of varying sizes, but they are so weathered that it’s uncertain what their purpose may have been, or who is buried in the graves.

#7. This city was built around and atop a series of large mineral deposits. The crystalline deposits capture the light, which causes them to glow in the dark for a limited time. Every night, this city experiences an extended dusk after the sun has set while the glow from the deposits slowly diminishes.

#8. Rather than build houses, the people of this city excavated their homes from the hillsides. Family dwellings consist of several connected artificial caves that are bored from the rock when they arrive. These caves serve to protect their inhabitants from the sweltering heat of the surrounding desert.

#9. These fields are scattered with enormous stone pots, ranging from about waist high to taller than an adult man. The purpose of these ancient vessels is unknown, though the theory is that they were used as grave markers and/or receptacles for human remains. The pots are uniformly undecorated with the exception of a single jar, which sports a carving of a man posing like a frog.

#10. This now-abandoned monastery was once home to hundreds of reclusive monks. In order to dissuade outsiders from visiting, the monks constructed their entire monastery on the underside of a tall cliff face, overlooking a deep chasm and with no direct access from above. Now, the structure is entirely inaccessible and unnavigable until we can rediscover the monks’ methods.

#11. Unique flora and fauna populate this small island. One of the most iconic species on the island is a strange tree with bare branches; each branch sprouts leaves at exactly the same height, creating a dense, umbrella-like canopy. The canopy provides valuable shade in the oppressive heat of this island, and the tree’s sap is a striking red resin once thought to be dragon’s blood.

#12. This traveling carnival is famous for its peculiar quirk of only opening after sunset. The attractions are specially designed to be constructed and collapsed quickly, giving the impression of a complex that appears and disappears instantly. The awe-inspiring acts and dazzling attractions are interactive for the audience and have an almost ethereal beauty.

#13. This island is unique in that it is completely artificial. Miles from the nearest shore, this city consists of an array of metal structures connected by bridges and filled in with soil. The population is largely self-sufficient, with limited contact to any mainland. These days, parts of the sprawling network are beginning to deteriorate due to abandonment.

#14. You wouldn’t be able to tell from the outside, but this massive mountain is actually partially hollow! The center of this mountain is a large cavern and serves as the home to an ancient settlement. With homes carved straight from the rock, this town has been sporadically occupied for centuries. Inhabitants move in when conditions outside the mountain become hostile, then leave when shipping in resources becomes difficult.

#15. This village offers accommodations in the form of holes dug into the hillside. These comfortable dwellings are well furnished and cozy, and perfect for anyone who likes to curl up in front of a fire with a hot drink and a good book, or to have a tasty meal at the local inn.

Question: How many locations were you able to correctly identify as fictional settings or real places?