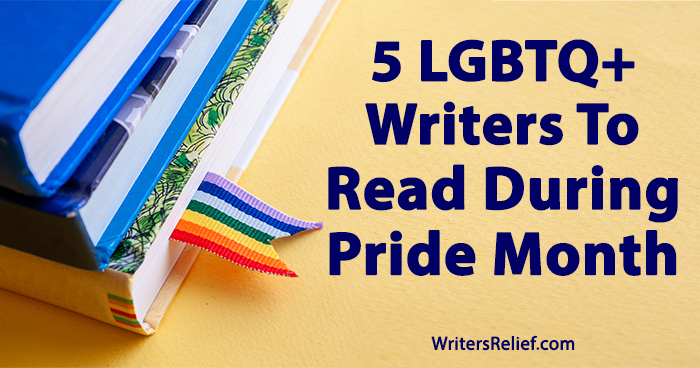 June is National Pride Month! While there are many wonderful and worthwhile ways to celebrate, at Writer’s Relief we believe every good celebration starts with great books and writers! Here are 5 contemporary LGBTQ+ writers to add to your To-Be-Read list this month—and every month!

Roxane Gay: Since she’s the New York Times bestselling author of The Bad Feminist and other books, you’ve probably already heard of Roxane Gay. She’s had dozens of stories and essays published in literary journals such as A Public Space, McSweeney’s, Tin House, Oxford American, and many others. She’s also worked on comic books, started her own literary magazines, and has a podcast—among many other projects. Roxane also got married to artist and writer Debbie Millman last year! You can check out Roxane’s work at roxanegay.com.

Ocean Vuong: A Vietnamese-American poet, writer, and professor, Ocean has been steadily earning awards and acclaim for his writing over the last few years. He writes about his family and about life as a gay man and an immigrant. His work has appeared in The Atlantic, Harper’s, The New Yorker, The New York Times, The Paris Review, The Village Voice, and many other publications. Ocean’s poetry collection Night Sky With Exit Wounds is a great read, and so is his debut novel, On Earth We’re Briefly Gorgeous. You can learn more about Ocean and his work at oceanvuong.com.

Danez Smith: A Black, queer, nonbinary writer and professor, Danez Smith won the Lambda Literary Award for Gay poetry in 2014 for their book [insert] Boy. Their second book, Don’t Call Us Dead: Poems, was a finalist for the National Book Award. Danez’s work has been featured in numerous venues, and they also co-host a podcast with Franny Choi. They were also the festival director for the Brave New Voices International Youth Poetry Slam in 2014. You can read more about them and their work at danezsmithpoet.com.

Samantha Irby: Another New York Times bestselling author, Samantha Irby writes about her personal life—and is wickedly funny while doing so. She has four books published and a blog, so there’s no shortage of material and no reason why you shouldn’t start reading right now! Samantha’s been married to her wife since 2016 and wrote about their relationship in her essay collection We Are Never Meeting in Real Life. Her author website, samanthairby.com, is the epitome of scaled-down minimalism, but still has everything you need to enjoy Samantha’s keen observance of life.

Meredith Talusan: In her Lambda Literary Award Finalist memoir, Fairest, Meredith Talusan writes about their experiences as a transgender Filipino immigrant with albinism and how this affected their life growing up. The intersection of their identities makes for some insightful views into race and gender. Meredith is also the founding executive editor of them, an LGBTQ+ digital platform, and is currently a contributing editor. You can learn more about Meredith and their writing at mtalusan.com.

Question: Which other LGBTQ+ writers do you enjoy reading?