Writing Strategies: Should You Plot It Or Wing It? | Writer’s Relief 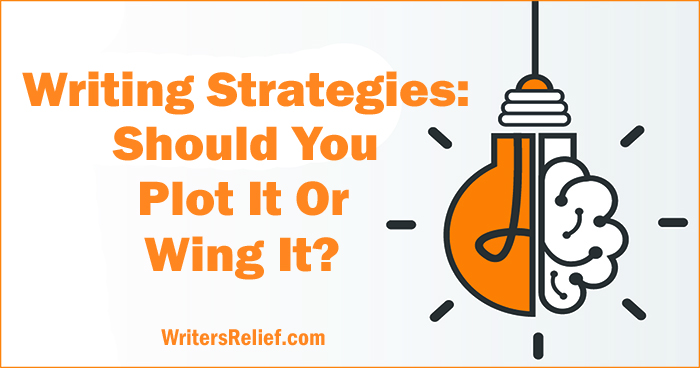 There are two basic approaches to writing: plotting out the major details, or letting an idea take you where it may, with no set plan. Some authors enjoy writing spontaneously without any restrictions. Others prefer sitting down at the desk with all ideas carefully researched, quotes sourced, and arguments thoroughly supported. But which of these writing strategies is better? At Writer’s Relief, we know the answer is…it depends on the writer. Here’s how you can determine if you should plot it or wing it when writing.

Plot It Or Wing It Writing Strategies: The Pros And Cons

The Wing It Writing Strategy

Writers who are more free-spirited and spontaneous often prefer to wing it when creating a poem or story or writing a book. Some writers use freewriting techniques to push through writer’s block, while others use this writing strategy to access the unconscious to free up valuable insights and open up emotional space. Many poets are spontaneous writers, preferring to polish rather than construct. Jack Kerouac preferred to wing it! Legend has it that he put a long roll of paper in his typewriter and just kept writing.

Winging it while you write can be energizing, and without structure or a preplanned plot to follow, surprising and lyrical writing can emerge. Writers who wing it have a vague idea what they want to write about, but the plot elements and character details unfold during the writing process rather than before. Any twists and turns in the story will feel more natural because they were not planned.

If you want to try to wing it while writing, don’t think or censor—write the first thing that comes to mind. Don’t worry about structure or punctuation, since interrupting the flow may stop it entirely.

Sometimes when you wing it, at the end of the day, you have a lot of writing that really isn’t cohesive or doesn’t move the story forward. Rather than having a completed story, poem, or book, you may end up with a lot of “works in progress” waiting to be finished. “Connecting the dots” doesn’t always happen.

The Plot It Writing Strategy

When you plot it, your writing has a predetermined plan and flow. It’s easier to see the big picture when you outline your work, make plot charts, construct narrative bullets, etc. Following an outline can make it easier to relax into the writing itself, freeing you to focus. John Grisham and J.K. Rowling are just two successful writers who prefer to follow a carefully prepared outline, diagramming the structure of the work for publication.

Plotting it allows you to organize your thoughts and sharpen your focus about what you want to write. You can use organizational tools to manage the writing process while still allowing room for creativity to flow.

Some writers feel plotting it hampers the creative process, resulting in an uninspired piece that seems stiff and formal. And if you do decide to make any changes along the way, they may have a ripple effect requiring major alterations to your existing outline—and all the writing based on it.

You may feel most comfortable with a hybrid approach: one that takes some structural elements of plotting it combined with the creative freedom of winging it. Setting aside time to write spontaneously may reveal unexpected insights in plot or character development. And careful planning and organization can play a critical role in completing a cohesive story and getting it ready for submission. One strategy is no better than the other—what’s important is determining which works best for you.

Question: When you write do you plot it, wing it, or a little of both?