Writer: Are You A Plotter or Pantser? Take This Quiz Now! | Writer’s Relief 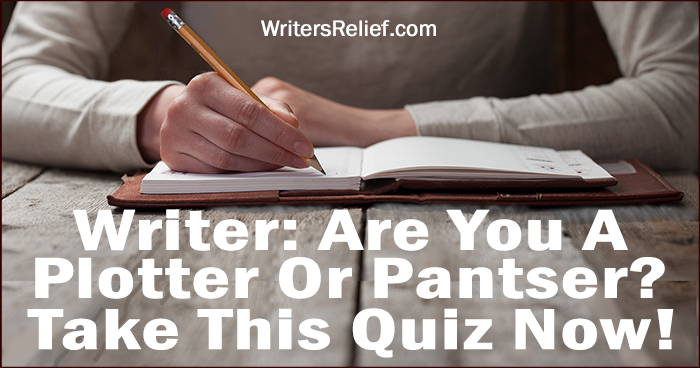 There is no right or wrong way to write a novel. But there are two main writing strategies authors often use when writing a book—and they both have funny names. Are you a “plotter” or a “pantser”? Not sure? Writer’s Relief offers you the definition of each, along with a quick quiz you can take now to help you decide which writing style works best for you.

Are You A Plotter?

Plotters outline their stories before writing them. (More on how to outline here.) They know all the details—characters, plot, subplots, climax, and resolution—before they write a single word. This prewriting strategy means more work up front, but less chance of developing writer’s block during the process, because plotters know exactly where they’re going. They have a handy map to lead them to their destination and keep them on course. Plotters tend to write more efficiently and finish novels more quickly than pantsers.

But before you decide that this is the way to go, hold on: There are some cons to being a plotter. For instance, if a plotter wants to change the outline, this generally involves changes to other chapters. Reconfiguring an outline is often more daunting than creating one from scratch, as each chapter may be affected by a change that happens in one. Also, because less creativity is involved in the writing process, it can start to feel more like a chore and become mundane. Let’s face it, planning every detail of anything—whether it’s a vacation or a novel—doesn’t leave much room for misadventure or happy accidents.

John Grisham and J.K. Rowling are plotters. Grisham feels that the more time he spends on an outline, the easier the book is to write. Rowling confesses that she uses a basic plot outline but fills in along the way, which sounds a lot like a “plantser,” the hybrid love child of a plotter and a pantser. Check out one of Rowling’s detailed spreadsheets here. It should come as no surprise that it is handwritten, since it’s rumored that she has used napkins, an airplane sick bag, and once even a dress to write the Harry Potter series.

Other plotters include R.L. Stine, Dan Brown, and the fantasy author Brandon Sanderson.

Are You A Pantser?

Pantsers are considered the free-spirited artists of the writing world because they tend to fly by the seat of their pants when crafting a story (hence the moniker “pants-er”). They let their characters establish themselves and allow the plot to unfold on its own. It’s less work up front, but more during the actual writing process. And though pantsers may have a vague idea about direction, they’re not interested in following a map. As a result, any twists and turns in the story feel more natural because they were not planned.

Sounds way more creative, fun, and adventurous, right? Who wouldn’t want to be a pantser? Well, creative freedom doesn’t come without a cost: Pantsers are more likely to fall victim to writer’s block. (Check out these 3-word prompts to break through writer’s block.) When they get stuck, some pantsers simply move on to another project, leaving behind an unfinished story or novel. They tend to have a computer full of works in progress. But this doesn’t mean they aren’t—or can’t become—successful writers.

Stephen King is a fly-by-the-seat-of-his-pants kind of writer. That’s right, he’s a pantser! In his book On Writing, he argues that he can tell which books have been outlined because they feel somewhat stale.

Margaret Atwood is also a pantser and compares creating a story using the structure of an outline to paint-by-numbers.

And this may be a little surprising, but George R.R. Martin is another pantser.

A Plotter, A Pantser, Or Somewhere In Between? Take This Quiz And Find Out!

If you answered TRUE to 6 or more questions, you are a born plotter.

If you answered TRUE to 4 or fewer, it looks like you may be a pantser.

Have exactly 5 TRUES? Guess what? You are a little of both—also known as a plantser. This method is widely used by many writers who understand the advantages of plotting out a novel while also giving the characters free will.

Of course, the strategy you employ to craft a story is simply a personal preference. One method is no better than the other—what’s important is finding the method that works best for you. If you need help getting started, check out these articles on our blog:

Your Book’s First Pages Are More Important Than Ever: Use These Strategies

15 Exercises To Strengthen Your Writing

Question: Can you tell when a book has been plotted as opposed to pantsed? How?