3 Situations When A Writer Should Say No | Writer’s Relief 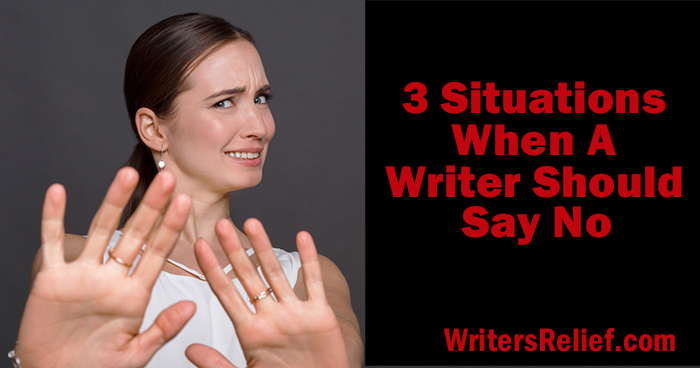 Many people have a hard time saying no, even when they feel it is the right thing to do. Writers in particular may find that a simple word like “no” is one of the trickiest in their extensive vocabularies. But at Writer’s Relief, we know that learning how to say no confidently and kindly is an essential skill for successful creative writers. It’s important to set boundaries and to be protective of your writing time, sensibilities, and the intentions of your work. While saying yes can lead to new experiences and opportunities—there are some situations when a writer should definitely say no.

How And When A Creative Writer Should Say No

An editor asks for a change that you’re strongly against. Sometimes, a well-meaning editor will ask a writer for a change that simply doesn’t sit right with the work. Perhaps the editorial request violates the author’s moral or ethical sensibilities. Or it might go against a writer’s vision or aesthetic.

You may want to give the editor’s suggestion a try; experimenting with new ideas can lead to interesting results. But if you’ve kept an open mind and you’re still certain that the editor’s request doesn’t suit you, it’s time to say no.

How to say no: Explain to the editor that you have given the situation real consideration, but ultimately, you don’t feel it serves the best interest of your manuscript or your creative expression. Respectfully explaining why you don’t think the change works will show the editor that you stand behind your writing—and that perhaps the suggested change is best left out.

Learn more: You Want Me To Do What? Dealing With Agent Or Editor Revision Requests.

You are asked to forsake your professional standards. Sometimes, the deadline pressure to turn in something—anything!—might tempt you to click “send” even when you know the manuscript is not yet in its best possible shape. Or, you may fall victim to the book publishing industry demand for the next installment in your series NOW and find yourself sacrificing the quality of your writing or story arc. Another possibility is that you might feel pressured to write something that’s not in your wheelhouse.

If you’re feeling pressured to forfeit your personal writing integrity, then perhaps it’s time to hit the brakes.

How to say no: Rejecting professional and market pressures often takes more than a single nicely worded no thank you email. It takes a lifelong commitment to personal excellence. Helping people understand and respect your personal ideals is rewarding but may take some time.

When you do say no to a person who is asking you to forsake your creative ethics, you may not want to be overly explicit about your position. After all, chances are your listener would be horrified to know that their request has actually offended your sensibilities. Instead of trying to explain your personal moral high ground, simply state that the request doesn’t work for you. Then, offer an alternative idea. You may discover that your unwavering commitment to personal integrity will make you the kind of writer others want to work with.

You are asked to take on an additional project when you’re struggling to meet a personal writing deadline. Modern life makes it hard enough to find time to write. Demands come at you from every angle: an employer who wants to double your workload, a friend who requests that you review a résumé, a fellow writer who could use a critique, a member of the PTA who just “volunteered” you to make cupcakes, or one of your children who needs extra homework help—just to name a few. Projects that cut into your writing time can lead to missed deadlines (both the official and unofficial kind). Plus, even if you do have the time for an additional project, extracurricular activities can sometimes interrupt your creative groove. Before you agree to take on another task, take a hard look at your writing goals and the schedule you need to keep in order to succeed.

How to say no: Even professional writers may find it difficult to explain that their creative writing needs to take precedence over other tasks. Writers who haven’t reached the status of being paid may find it even more difficult to convince friends and family that the work of writing must be taken seriously—even though approaching writing as your work may be the number one mind-set trick for longevity in the publishing business.

Learn more: What To Do When Your Family And Friends Aren’t Supportive Of Your Writing | Writer’s Relief.

The Dangers Of Trying To Explain Your Reasons For Saying No

Many communication experts agree that when it’s time to say no, the one thing you should never, ever do is offer a detailed explanation as to why you are rejecting the request. Some situations may require a little bit of clarification, but it’s important to be as vague as possible. Otherwise, your listener will more than likely try to help you say yes by offering solutions that neutralize your reasons for saying no.

For example, if you tell a friend that you will not be able to bring your world-famous meatballs to a party, you may want to avoid saying, I can’t because I have to write. If your friend doesn’t understand your deep professional-level commitment to your writing, he or she might be insulted. Better to be vague and say, I have too many commitments right now. Then, offer an alternative: Maybe I can pick something up at the store.

If you don’t want to offer an alternative, simply thank your friend for his or her compassionate understanding—whether it’s offered it or not. If you seem grateful enough, chances are you won’t be pressured  into saying yes.

The hardest part of saying no might be dealing with the awkward silence that follows your announcement. You may be inclined to fill gaps in the conversation with explanations and excuses, especially if you’re already feeling put on the spot. Resist the urge.

Remember that silence is okay. Once you have said what you needed to say, you’re done. It’s the other person’s turn to talk. And you don’t have to answer any questions you don’t want to. Stick with your original answer, rephrase it if you need to, and eventually, your listener will begin to respect your position.

Many writers may be inclined to say yes when they really want to say no.

For example, a writer might say, Sure, I can take on that extra project. I’ll just have to stay up late and lose sleep for a few weeks in order to eke out some time on my new manuscript. Or, I can always get back to my book project next month…next year…whenever. Or even, I guess I’ll do what the editor wants me to do just so I can get my words in print without making a fuss.

Over time, saying yes when your soul is screaming at you to say no will create friction and dissonance between the person you’re pretending to be and the person you really are. And that’s not good for your writing.

Ultimately, that tension can lead to writer’s block. Or, it could cause a writer to lose track of the sound of his or her own voice. If the tension goes on long enough, it could lead to total writing career burnout.

What Does It Really Mean To Say No?

Saying no in a personal or professional situation can stir up negative feelings for writers. But here’s something to consider: Saying no to one thing is saying yes to something else.

Declining a request doesn’t have to be about disappointing someone else’s expectations; it’s about following your truth, respecting your own interests and values, and freeing yourself to be the writer you want to be.

When you say no to a situation that doesn’t work for you—kindly and sensitively—you free yourself to say yes to the life you want.

Motivational Quotes To Help You Say No

Learn to say no to the good so you can say yes to the best. ―John C. Maxwell

No is a complete sentence. It does not require an explanation to follow. You can truly answer someone’s request with a simple No. ―Sharon E. Rainey

One friend told me her one big takeaway from three years and $11,000 of therapy was learn to say no. And when you do, don’t complain and don’t explain. Every excuse you make is like an invitation to ask you again in a different way. ―Kelly Corrigan

More Articles About Learning How To Say No

Ten Guilt-Free Strategies For Saying No

Twenty-One Ways To “Give Good No”

Five Ways To Say No To Friends And Family

Question: As a writer, do you find it difficult to say no?