You Want Me To Do What? Dealing With Agent Or Editor Revision Requests 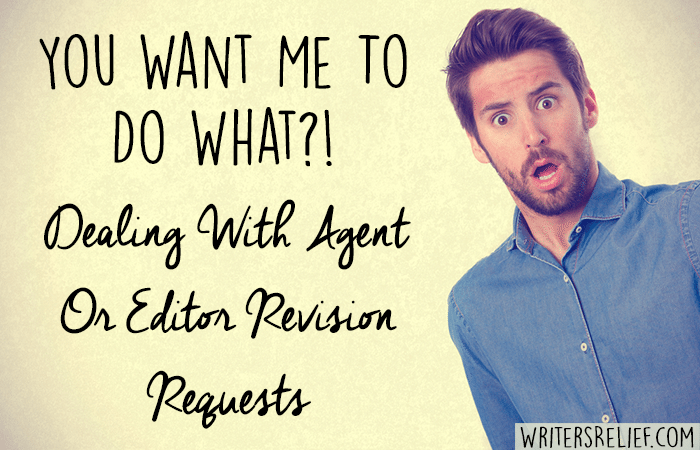 If a member of your critique group suggests a change you don’t agree with, you can easily ignore the comment. But when you’re talking to the literary agent who is trying to get you a book deal, or the literary journal editor who has made you an offer of publication—it’s a lot harder to say, “There’s no way I’m making that revision.”

A good editor or literary agent will approach your work with sensitivity and care. In a best-case scenario, you will both be on the same page when it comes to your writing, and the suggested edits will only make your work better.

But sometimes, a major disconnect occurs. You might be asked to change a main character’s personality, to delete entire passages, to change POVs, or to rewrite your ending (which, as every writer knows, means you’ll end up rewriting a lot of your beginning as well).

Step One: Don’t react too quickly. As a writer, it’s your natural inclination to defend your work. Objectivity rarely comes easily. So don’t immediately pick up the phone and give your editor an earful, or dash off a nasty email to your agent and hit send. Instead, give yourself some time to think about the suggested edit.

Step Two: Consider your options. Even though you disagree with the requested revisions, you might want to give the suggestions a try. You’ll gain a better understanding of why the suggestion won’t work if you actually try it. But until you roll up your sleeves and get your fingers on the keyboard, your reaction is probably going to be driven by your emotions—not your logical, thinking, writerly brain.The worst thing that will happen? You’ll revert back to your original draft.

And the best thing that could happen? Exploring the unwelcome suggestion might lead you to an agreement or compromise with the agent or editor who broached the topic.

Step Three: Make the call. If you’ve given the suggestions a genuine try and still don’t agree with them, now is the time to pick up the phone for a heart-to-heart. Your literary agent or editor will appreciate that you took his or her suggestions seriously and attempted to incorporate them into your writing. Your open-mindedness and hard work will speak volumes about your confidence and professionalism as a writer.

A conversation about alternative ideas might lead you to agree on a revision you both can work with. Or your chat could help your editor clarify what he or she believes is the core problem. What you both learn during the discussion may lead to a viable alternative solution.

Just remember this: You both want the same thing. Whether it’s a novel, short prose, or a poem, you and your editor want your writing to be the best it can possibly be. Approach any discussions (or even negotiations) with this fact in mind.

What Are Your Rights? Can You Refuse To Make A Change You Don’t Want To Make?

Many editors and literary agents will hear you out—provided you are able to make a compelling, non-emotional argument as to why you believe the suggested changes shouldn’t be made. Publishing industry professionals understand that a writer’s creation is sacrosanct. While they might push you in a certain direction, most will know not to push you too hard.

But sometimes, a literary agent or an editor will feel that it’s necessary to draw a line in the sand. And when that happens, the two of you may reach an impasse. As long as your contract doesn’t state otherwise, either one of you can walk away from the deal if necessary. Learn more about literary agency contracts and literary journal contracts.

If you do decide to part ways, be sure to put your intentions in writing. And try to make your separation as smooth and amicable as possible. You don’t want to get a reputation for being difficult to work with, and you never know who your agent or editor knows.

QUESTION: Have you ever received a revision suggestion you didn’t like?