8 Writers Who Crossed Over From Other Careers | Writer’s Relief 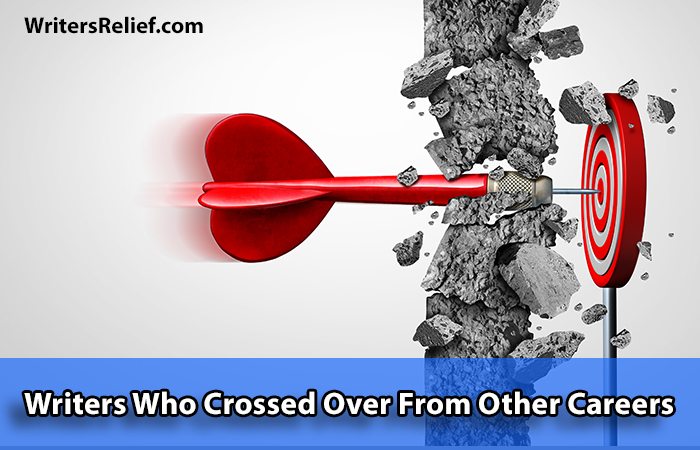 When you’re reading the latest best seller from your favorite author, you might think he or she was born with a pen in hand, destined for literary greatness from day one. But the truth is, most successful authors had day jobs just like the rest of us! And often, those careers served as inspiration for their writing.

So what jobs did some of your favorite authors hold before they became professional authors? Writer’s Relief has put together an intriguing list:

Anita Brookner, author of Hotel du Lac, was a successful art historian and professor. She was the first woman to hold a Slade Professorship of Fine Art at Cambridge University, and taught at the Courtauld Institute of Art until 1988. She didn’t publish her first novel, The Debut (also known as A Start in Life), until she was fifty-three years old! Her novel Hotel du Lac won the Man Booker Prize in 1984.

Agatha Christie, author of Murder on the Orient Express, served as an attendant for injured troops at a military hospital during World War I. After two years, she qualified as an apothecary’s assistant. She obtained a deep knowledge of pharmaceuticals, which she used in many of her mystery novels.

Emily Giffin, author of Something Borrowed and Something Blue, practiced litigation in a large Manhattan firm for several years, writing a novel in her very limited spare time. When that manuscript was rejected, she retired from law practice and began writing full time. The result of this was her best-selling first novel, Something Borrowed.

John Green, author of The Fault in Our Stars and Looking for Alaska, was a chaplain at Nationwide Children’s Hospital in Columbus, Ohio. He planned on becoming an Episcopal priest, but his friendship with a cancer patient inspired him to write the best-selling romance The Fault in Our Stars.

Khaled Hosseini, author of The Kite Runner and A Thousand Splendid Suns, earned a medical degree from University of California, San Diego School of Medicine. While serving as an internist, he wrote The Kite Runner, which spent more than one hundred weeks on the New York Times best-seller list.

Toni Morrison, author of Beloved and Song of Solomon, earned a master’s in English from Cornell University. She taught at the university level for ten years before taking a job editing textbooks. Later, she moved to Manhattan and published her first novel, The Bluest Eye.

Rainbow Rowell, author of Eleanor & Park and Fangirl, was a columnist and ad copywriter at the Omaha World-Herald from 1995–2012. After leaving this position, she began working for an ad agency and wrote what would become her first novel, Attachments, in her spare time.

Abraham Verghese, author of Cutting for Stone, was born in Ethiopia, received his medical training in India, and came to America for a medical residency. He wrote about his early experiences as an Ethiopian doctor in America in a memoir entitled My Own Country: A Doctor’s Story. His interest in writing led him to the Iowa Writers’ Workshop, where he earned his MFA. In addition to writing and working as a physician, he is also a public speaker on patient care as well as a professor of medicine.

Question: As an author, what is your day job?