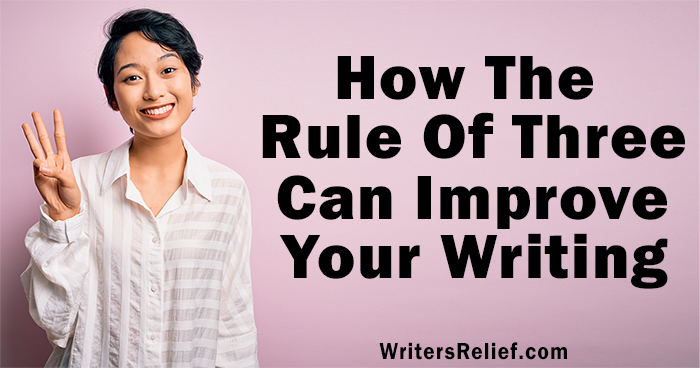 Some successful writers follow the rules, and some don’t. But knowing and following grammar rules, writing style rules, proofreading rules, and submission rules can help boost your odds of getting published. And the experts at Writer’s Relief know another rule that savvy writers should follow: the Rule of Three. This writing advice is based on the psychology that things are somehow more appealing when they occur in threes. Here’s how using the Rule of Three can help improve your writing!

Improve Your Writing With The Rule Of Three

One: Give Your Readers Satisfaction: The comfort of “three” occurs in many aspects of life. A Latin quote, Omne trium, perfectum, translates to “everything that comes in threes is perfect.”

There’s even the old superstition that good things—or bad things—happen in threes.

Using the Rule of Three in your writing will help keep your readers engaged. If your characters attempt something and fail, conflict arises. When they try and fail again, frustration and tension are increased. But if they fail the third time and move on to a fourth attempt—it starts to become tedious. Having them succeed on the third try will feel more “complete” to your readers.

Two: Create A Pattern: Three is the minimum number of things required to create a pattern, and readers enjoy spotting a pattern and trying to predict what happens next. For instance, you might briefly introduce a character in your story, and then bring that character back a bit later. Readers will remember the character and start to form opinions. By the third appearance, your readers have a sense of what to expect from this character—whether as a friend, a foe, or something else.

Three! Add Some Surprise: Another way to use the Rule of Three in your writing is to introduce a plot twist on the third appearance. Comedians often use groupings of three in their jokes. They start you on a path with the first two parts—then the third element subverts your expectations and you laugh! Here’s an example from author and comedian Laura Kightlinger: “I can’t think of anything worse after a night of drinking than waking up next to someone and not being able to remember their name, or how you met, or why they’re dead.”

Introduce a surprising twist by following the Rule of Three. You might have a new character show up out of the blue twice to assist your protagonist—but then betray your hero on the third appearance. Or a character in your short story or book might be a shy, mousy type who backs down twice when confronted, only to suddenly stand up for what’s right on the third try. Joslyn Chase, a prize-winning author of mysteries and thrillers, uses the Rule of Three to perfection when she adds this little twist at the end: “Three things your spouse wants you to do in the event of an argument—take a breath, take a hint, and take a hike.”

Of course, following grammar, style, and trope rules can help us become better writers, but as author Somerset Maugham so famously stated (while invoking the Rule of Three), “There are three rules for writing a novel. Unfortunately, no one knows what they are.”

One thing we do know: Adding the Rule of Three to your personal writing tool kit can improve your writing (and maybe make it three times better!).

Question: What examples of the Rule of Three have you noticed in your reading?