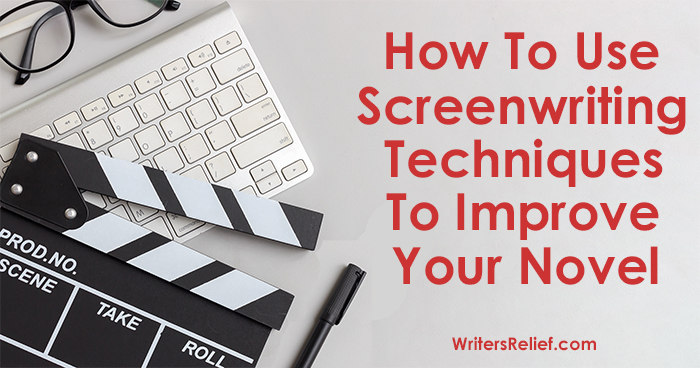 Writers of novels may always feel at odds with screenwriters—how often do we hear “the book was better”? But let’s be honest, the heart of any good movie is the writing: consider such well-written movies as Sideways, Lost In Translation, and, yes, Finding Nemo. At Writer’s Relief, we know that there are screenwriting techniques and tips that can help improve a novel and make it more engaging for readers. Here’s what novelists can learn from screenwriters!

Screenwriting Techniques That Can Improve Your Novel

Good Structure: The standard screenplay has three main parts or acts: Setup, Confrontation, and Resolution. To move the story forward, these acts are typically separated by two major plot points. Not every film is structured in three acts, however. Some have four or five acts. The 2018 film The Favourite is divided into eight distinct acts! That’s a hard act to follow. But no matter how many acts your screenplay has, the resolution needs to be the result of tension created by carefully stitching each act together.

The same idea can be applied to a novel, but instead of acts, chapters are the thread used to build tension. A good story drives toward its climax without meandering from moment to unrelated moment. And keep in mind that if there are loose threads, the story might fall apart.

Well-Developed Characters: Plot structure is important in both screenwriting and novel writing. But character development is what will make a movie or a book memorable. Without creating an emotional interest or connection to the characters, all you’ll have are cardboard cutouts rather than flesh-and-blood beings that audiences can relate to and engage with.

One interesting paradox between novel writing and screenwriting is that, while an actor’s performance might make up for any script deficiencies, a novelist only has what’s on the page. This makes the author’s responsibility in developing characters even more important. Well-written characters will go a long way in terms of keeping those pages turning.

Action! Show, Don’t Tell: Most writers are familiar with the advice: Show, don’t tell. In screenwriting, this is especially important, since film is a visual medium. Think about what’s more compelling to watch: a character saying they have a nervous tic, or seeing that nervous tic in action?

Novel writing is no different. Instead of simply telling the reader “This character is nervous,” give the character a habit that can exemplify that emotional state. And don’t write paragraphs of “telling” when dialogue can move the story forward in a more interesting way. You can write a passive scene: Joe went into the bodega and bought a lottery ticket. He had promised to give his winnings to Carol. Or the more compelling, active version: “Hey, Daniel, I’d like to buy a lottery ticket! I promised Carol I’d give her all the winnings if I hit the jackpot!”

An Iconic Image: Going back to the “show, don’t tell” rule, think of some of the most popular films of all time. More often than not, specific images will come to mind, such as Elliot cycling in front of the moon in E.T.: the Extra-Terrestrial, Dorothy and her friends skipping down the yellow brick road in The Wizard of Oz, and the “I’m flying” scene in Titanic. Each of these images conveys tone, mood, and atmosphere in these films. What are some encompassing and central images you can use in your novel that will stick in the reader’s mind?

Good Pacing: Have you ever watched a movie that lasted close to three hours, but felt like only fifteen minutes? Likewise, have you watched an eighty-minute film that seemed to go on for eighty days? This is a direct result of the pacing: the speed at which a story moves. There is no hard and fast rule to how long (or short!) a film or novel can be. Most screenplays end up in the 120-page range (one page = one minute of screen time), while 300 to 400 pages is fairly standard for most novels.

In a movie, when scenes are too drawn out, the audience will get bored waiting for the story to move on. But if scenes fly by, there may not be enough time for viewers to properly register details. It’s the same for a novel: Every scene you write should either develop your characters or propel the plot forward—ideally, both. If a scene is causing your story to lag, it should be cut. Not only will this keep your word count in check, but it will also keep your story lean and the tension high so that readers are interested every step of the way.

By incorporating these screenwriting techniques into your novel, you’ll improve your story and keep readers turning pages to the very end. And who knows—maybe you’ll be one step closer to a movie deal for your book!

QUESTION: Which screenwriting technique do you feel most helps a novel?