When To Use Affect and Effect: “Affectations Can Be Dangerous” | Writer’s Relief 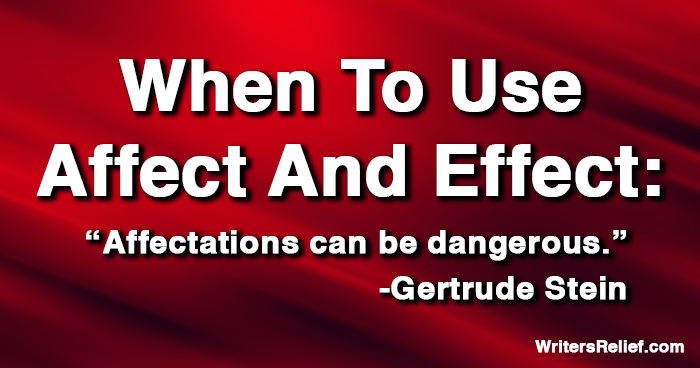 Writers, are you stumped when choosing between the homophones AFFECT and EFFECT? Fret no more. Writer’s Relief has some tips that can help you make the right decision.

Affect is most commonly (as in 95% of the time) a verb that means to change or alter.

Effect is most commonly a noun that refers to a result or consequence.

However, to confuse the issue, affect can, on rare occasion, be a noun. But this is mostly in reference to psychology.

And you guessed it, effect can, at times, be a verb meaning to cause or bring about. But this is generally referencing policies or implementing some kind of change. A good guideline to follow when determining if you should use effect as a verb is to replace it with the words “bring about.” Also, take note: Effect as a verb is commonly preceded by the infinitive to.

Is any of this making cents/sense? Don’t you just love homophones?

To further clear up the confusion about AFFECT vs. EFFECT, one of the first things you can do is recognize that in most cases, affect should be used as a verb and effect as a noun. An easy way to remember this is to associate A with “action,” and E with “end result.”

Take a look at this sentence:

Michael was affected (verb) by the number of jelly beans he consumed late last night, but he is grateful they will not have a lasting effect (noun).

Check out these other examples:

Incorrect: Carol’s love of haiku had a profound affect on the way she composed tweets but did little for her Toastmaster’s class.

Correct: The effect of Carol’s Elf on the Shelf sweater stirred emotion among her coworkers. (Especially when she showed them her matching socks.)

Incorrect: Jill’s new cat-eyeglasses were effecting her balance, not to mention her reputation.

Correct: A part of Jill’s responsibility as head Mouseketeer was to effect change in the company’s strict No Cats at Work policy.

Okay, your turn. Show us what you’ve learned.