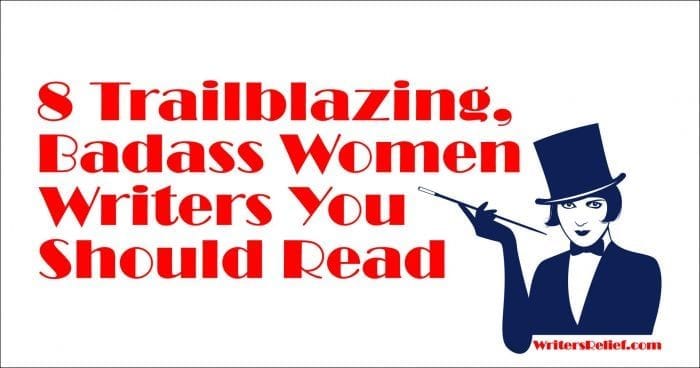 March is Women’s History Month, and at Writer’s Relief, we feel the best way to celebrate is to learn about—and read—some of history’s most trailblazing, badass female writers. Whether they broke the molds of society, changed the face of literature, or spoke out for their beliefs, these authors are all inspiring examples of brave women who dared to be different—and did it well.

Aphra Behn (1640–1689). Though not much is known about Aphra Behn’s life, we do know that she was recruited as a spy by King Charles II. She was also the first Englishwoman to have earned a living through her writing.

According to historians, while employed as a spy, Behn was either not paid or not paid enough, so she began writing plays to support herself. She also wrote fiction and poetry, but her plays brought in the most income.

Even without a moneyed background or being allowed an education because she was a woman, Behn managed to forge a career for herself out of writing. And she was one of the first women to do so.

Phillis Wheatley (1753–1784). Born in West Africa and sold into slavery around the age of seven, Wheatley was the first published African-American female poet.

The Wheatley family who purchased Phillis recognized her intelligence and literary talent and allowed her to focus on studies rather than household duties. Eventually, even George Washington praised Wheatley’s work and met with her. She was freed following the publication of her first book.

Besides writing poetry, Wheatley also corresponded with other writers, articulating her views on political matters and arguing for the freedom of all people. Though she died in poverty at only thirty-one years old, Wheatley certainly left her mark on the world of literature.

Louisa May Alcott (1832–1888). Perhaps best known for her book Little Women, Alcott was an American writer, abolitionist, and feminist. She grew up surrounded by many contemporary authors and intellectuals, including Nathaniel Hawthorne, Henry David Thoreau, and Ralph Waldo Emerson.

Alcott and her family also served as a stop on the Underground Railroad. She advocated for women’s suffrage, and was the first woman registered to vote in Concord, MA. She also served as a Union nurse in the Civil War (until contracting typhoid) and was an advocate for running as exercise—which is more shocking than it sounds, since societal norms frowned on women engaging in such a physical activity.

Upon her death, Alcott was buried in Sleepy Hollow cemetery alongside Emerson, Hawthorne, and Thoreau, in a spot known as “Author’s Ridge.”

Though born into wealth, Wharton eschewed the fashion and expected etiquette of her time and instead pursued education and writing.

Wharton traveled extensively, crossing the Atlantic Ocean over sixty times and writing about her travels. Wharton lived in Paris when World War I broke out, and instead of leaving, she remained and opened a workroom for women where she fed and paid them for their sewing. She traveled to the front lines numerous times and supported refugees, the unemployed, and those injured in the war.

Though her first novel wasn’t published until she was forty years old, Wharton ultimately wrote and published fifteen novels and novellas, eighty-five short stories, poetry, books on travel, design, cultural and literary criticism, and a memoir.

Nellie Bly (1864–1922). This American journalist is best known for feigning mental illness to get an undercover look inside one of New York’s most notorious insane asylums.

Despite not being able to finish school due to her family’s financial crisis, Nellie nabbed her first job as a columnist by penning a smart letter to the editor of the Pittsburgh Dispatch about the paper’s not-so-great representation of women. The editor printed her letter and offered her a job.

Wanting to cover more serious topics, Bly moved on to The New York World, and had herself committed to the mental hospital on Blackwell’s Island. Even after she dropped her “crazy” act, the insane asylum would not release Bly, and the newspaper had to send an attorney to get her out.

She then wrote a series of chilling articles about how terribly the patients were treated. These were later made into the book Ten Days in a Mad-House. The book launched Bly’s career and kicked off the practice of what we now call investigative journalism.

Bly also took a trip around the world in seventy-two days, which made her a world record holder for a few months. She married a millionaire and when he passed away, Bly inherited control of his manufacturing company. She went on to patent several inventions of her own. Bly also returned to journalism in her later years, covering important topics like the women’s suffrage movement and World War I. In fact, she was mistaken for a British spy and arrested while conducting research for her series on Europe’s Eastern Front.

Sidonie-Gabrielle Colette (1873–1954). A French author known simply as Colette, she was nominated for the Nobel Prize in Literature in 1948.

Colette married author Henry Gauthier-Villars, and her first four novels were published under his name. The books became wildly successful, and Colette wanted her own name on her work. Her husband refused, and they ultimately divorced.

Colette struggled for money after the divorce, since she was not entitled to any of the royalties from her books. Inspired by her struggles during this time, she wrote about a woman’s independence in a male-dominated society and world.

Colette eventually garnered her own success in her own name, and is now acknowledged as one of France’s greatest female writers.

Carson McCullers (1917–1967). Another well-known author, McCullers finished her first book, the literary classic The Heart Is a Lonely Hunter, at just twenty-three years old. She went on to publish numerous other successful works.

McCullers was close friends with other famous writers of her time, like Tennessee Williams and Truman Capote. She spent much of her life shucking off the conventions of heterosexuality, choosing to dress in men’s clothes and pursue relationships with women.

McCullers also defied convention in her writing, which is perhaps why she was so successful. She wrote about loneliness, disabled characters, gay characters, outcasts, and eccentric people. McCullers broke the mold in many ways, both professionally and personally, and her writing is still read and enjoyed by readers today.

Audre Lorde (1934–1992). Most people have heard of Audre Lorde—and with good reason. Lorde was an American writer, feminist, activist, librarian, and more. As an African-American lesbian born to immigrant parents, she was a champion for intersectional feminism long before it was a mainstream topic of discussion.

Lorde wrote extensively about race, sexuality, and gender. She also battled cancer for fourteen years, during which she wrote The Cancer Journals, an examination of the medical profession through a feminist lens.

Lorde worked her way through school and became a librarian, a successful, published writer, and a professor. She was a talented writer and was never afraid to tackle difficult issues or to be open about her many identities, personal life, and beliefs. She remains a respected icon in the worlds of literature and political activism.

Question: Which women writers do you like to read?