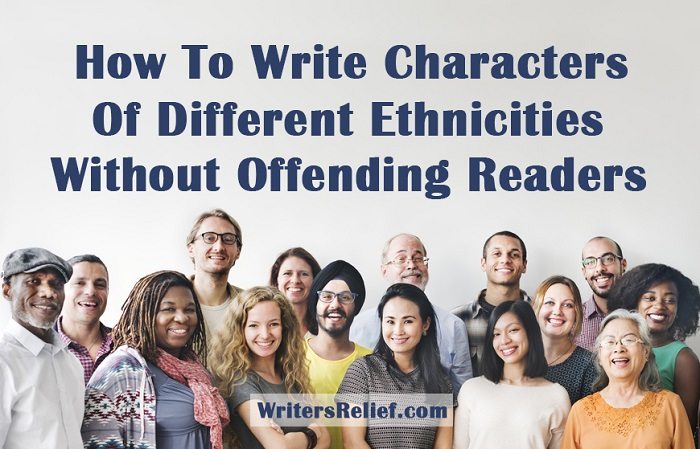 In order to create believable characters, writers must learn to write from many different POV perspectives. We put ourselves in the shoes of other people who are older or younger; hold political opinions that make us cringe; are violent in ways we would never be; are of the opposite sex; hold different sexual orientations/interests; grew up in circumstances totally unlike our own; or are of different ethnicities.

Anytime a writer steps into the mind of a character, there’s always the chance some readers will feel the writer “got it all wrong.” But creating a character of an ethnicity different than your own (or which you have no experience with) holds particular challenges. If and when you write a character whose ethnic or racial heritage is different from your own, here are some tips from Writer’s Relief that may help.

Tips For Writing Characters Of A Different Heritage

Be aware of stereotypes. There’s some danger that a character who seems well-rounded and deliberate to you might strike someone else as nothing more than a stereotype. If you want to avoid stereotypes, you’ve got to know what they are—from the perspective of the character you’re writing about. That means you’ll have to…

Do serious research. How does a writer make the leap from being a researcher who looks into a person’s life from the outside, to a character who lives and breathes it? Like a method actor becoming familiar with a role, you must rely on an intimate knowledge of your subject to span the gap between your real life and someone else’s potentially very different one.

Don’t write off “minor” characters. Sometimes, writers may be inclined to use shorthand to make quick sketches of secondary characters—and these tactics can feel awfully close to stereotype. As they say: “There are no small parts; only small actors.” Your secondary characters deserve to be treated as fully well-rounded individuals in their own right—no matter their heritage.

When in doubt, write from a place of shared understanding. Authors must understand who they’re writing about, whether the character is a five-year-old child, a war hero with PTSD, or the worst antagonist ever. And that strategy makes readers care. Bring your best self to your characters, and their emotional authenticity will shine through.

Seek feedback from beta readers. Film studios preview their movies for test audiences to be sure the characters are resonating as intended—and you might consider doing the same thing with your writing to ensure your portrayals hit the right notes.

Every Reader’s Opinion Has Value

Finally, you may discover that some readers simply don’t appreciate character POVs that don’t reflect the author’s personal experience. You also might find that some readers will object to your portrayals no matter how hard you’ve worked on them. But don’t be too quick to discredit opinions that don’t meld with yours. Listen, learn, and empathize—after all, that’s what makes a great writer!

Question: Have you ever written a character whose heritage was different from your own? What was challenging? What wasn’t? How did readers react?