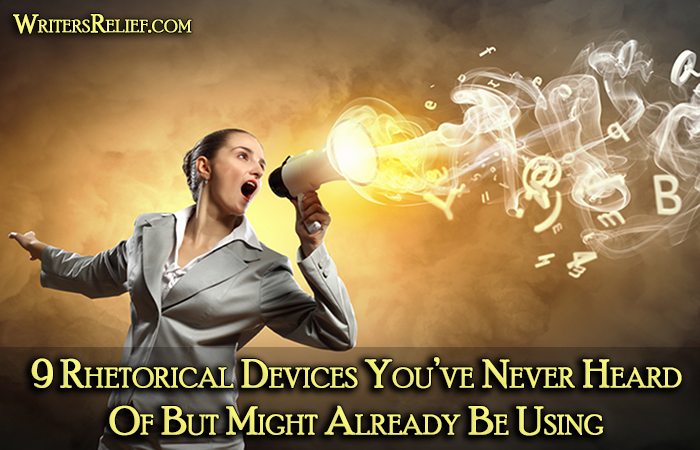 Most writers know when they’re using common rhetorical devices such as alliteration and simile. But in addition to these familiar options, there are many literary techniques with obscure-sounding names that also add impact to your writing. In fact, you’re probably already using them—at least occasionally! Here are nine of our favorites:

Antiphrasis: the usually ironic or humorous use of words in senses opposite to the generally accepted meanings

Shakespeare was using this device when he had Mark Antony refer to Julius Caesar’s murderers as “honorable men.”

Chiasmus: two or more clauses are related to each other through a reversal of structures in order to make a point

In Dr. Seuss’s Horton Hatches the Egg, Horton uses chiasmus when he affirms, “I meant what I said, and I said what I meant.”

Epizeuxis: the immediate repetition of a word or phrase for emphasis or to express strong emotion

Samuel Taylor Coleridge provides an example in “The Rime of the Ancient Mariner”:

Alone, alone, all, all alone,
Alone on a wide, wide sea!

Hendiadys: the use of two words linked by the conjunction “and” instead of the one modifying the other

Macbeth, speaking of the passage of life, says, “It is a tale / Told by an idiot, full of sound and fury, / Signifying nothing.” For Shakespeare, the construction “sound and fury” was more effective than “furious sound.”

Isocolon: a figure of speech in which there are two or more parts of a sentence that are identical in length, rhythm, and structure

Here is an example from Charles Dickens’s A Tale of Two Cities:

Litotes: a form of ironic understatement in which a negative statement expresses a positive sentiment

For example, in The Great Gatsby, F. Scott Fitzgerald uses litotes to convey how different West Egg is from East Egg:

“I lived at West Egg, the—well, the less fashionable of the two, though this is a most superficial tag to express the bizarre and not a little sinister contrast between them.”

“Not a little sinister contrast” is, indeed, an understatement.

Metonymy: renaming something with a word or phrase with which the original thing is closely associated

Margaret Mitchell uses metonymy in Gone With the Wind when Scarlett O’Hara says, “I’m mighty glad Georgia waited till after Christmas before it secedes or it would have ruined the Christmas parties.”

“Georgia” refers not to a geographical entity but to all elements of the state, including its citizens and its government.

Polysyndeton: a figure of speech in which a conjunction is repeated or several conjunctions are used even though they are not grammatically necessary

Maya Angelou uses this technique in her autobiography, I Know Why the Caged Bird Sings:

“They basked in the righteousness of the poor and the exclusiveness of the downtrodden. Let the whitefolks have their money and power and segregation and sarcasm and big houses and schools and lawns like carpets, and books, and mostly—mostly—let them have their whiteness. It was better to be meek and lowly, spat upon and abused for this little time than to spend eternity frying in the fires of hell.”

Zeugma: a figure of speech in which a word applies to more than one other word, blending ideas that are grammatically and logically different

In this example of zeugma from “The Rape of the Lock,” Alexander Pope plays on the different meanings of the verb “take”:

While you might be worried that using rhetorical devices will make your writing seem artificial, employing them effectively can actually strengthen your work’s power to persuade your readers to love or hate your character’s point of view, to believe your plot, or to “get” your poem. The trick is to use these techniques so subtly that they are almost undetectable. That takes practice, so choose a few of these rhetorical devices and start writing!

QUESTION: Which of these literary techniques do you already use in your writing?

← ProofNEEDing: That Nine-To-Five Grind 5 Tips On Writing An Amazing Author Bio If You’re Not Well-Published →