5 Unmistakable Signs That Your Book Could Make A Great Series 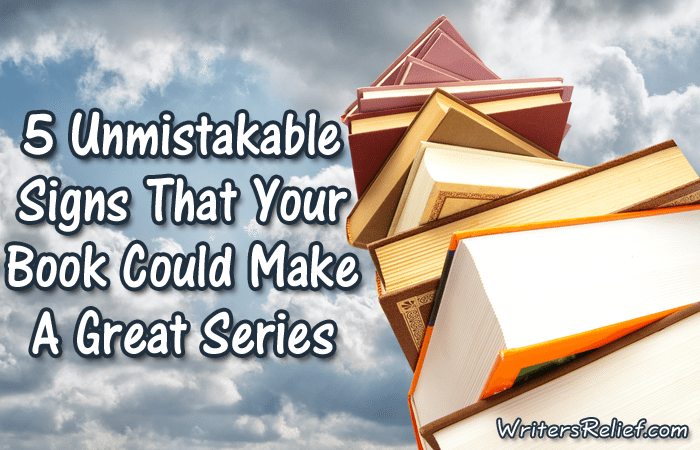 Wondering if your novel (or even your short story) has the potential to be expanded into a series? Here are some signs that your story may have book series potential!

1. You’re writing in a book genre that lends itself to series format. Cozy mysteries (of the Agatha Christie variety), fantasy novels (The Lord of the Rings), thrillers (The Girl With the Dragon Tattoo), and some young adult novels (Cinder, The Sisterhood of the Traveling Pants, Twilight) traditionally do well when pitched as a multi-book project. If you’re writing in a genre that is favorable for the series format—go for it!

2. Your characters are exceptional. Series characters tend to be larger than life. Their choices ripple not just through their households, but through their worlds. Maybe they always have a witty comeback, or they don’t back down from challenges. Readers want to “hang out” with them time and again, book after book, because it’s fascinating to see what they will do next. Consider Janet Evanovich’s sassy sleuth, Stephanie Plum.

3. Your plot is vast in scope. Epic stories of war that span generations often must be encapsulated across multiple books, simply because a single book wouldn’t do justice to the scope of the story or the author’s intentions. Think of The Hunger Games, Outlander, or Game of Thrones. Their authors offer worlds that are absolutely enormous, worlds that can keep us entertained across thousands of pages.

4. Your book is a saga. Books that follow a family for generations over time, as well as books that explore the scope of a long relationship, are also excellent choices for a series. Elena Ferrante’s “Neapolitan” novels explore the relationship of two women over time. Louisa May Alcott’s classic Little Women kicks off a series that follows the March family.

5. Your book really, really needs a sequel. One book simply can’t contain all of the momentum and creative energy that propelled your first book into being with the force of the big bang. Imagine if Harry Potter’s story had ended with just the first book!

Other Ways Of Creating A Book Series

Some authors are able to create loose connections for otherwise singular books, thereby creating a series sensibility. How? Books in a series can be joined by a fun trope (Tessa Dare’s Castles Ever After is a series of romances in which a heroine becomes the owner of a castle). Some series are centered around a town (Robyn Carr’s Virgin River series). Other books are connected based on blood ties (Bella Andre’s “The Sullivans” novels). Some publishers, like Harlequin, specialize in publishing strongly branded series.

Note: Many of the examples here are from the romance genre, which especially favors loosely organized series—books that can be read out of order, each with different protagonists.

Sometimes, a book simply doesn’t “work” as a part of a series. Consider Margaret Mitchell’s Gone With the Wind. As everyone knows, Rhett leaves Scarlet at the end of the story. And yet, in the heavily promoted 1991 sequel, Scarlet, written by Alexandra Ripley, the two are together again. The book was largely panned by critics. The moral of the story: If a book really doesn’t need a sequel (Gone With the Wind was fabulous and complete on its own!), then it shouldn’t have one.

How To Mention Your Multi-Book Concept In A Query Letter

If you’re querying literary agents with a series idea, be careful. Literary agents sometimes get skittish about writers who are pitching “book one” but who have already written thirteen more in the series. In a query, you can be a little bit vague about just how much you have or haven’t written: I hope this book will be the first in a series, and I would love to speak with you about series potential.

QUESTION: Are you a series author? Please share your tips about writing a series of books by leaving your note in our comments section!