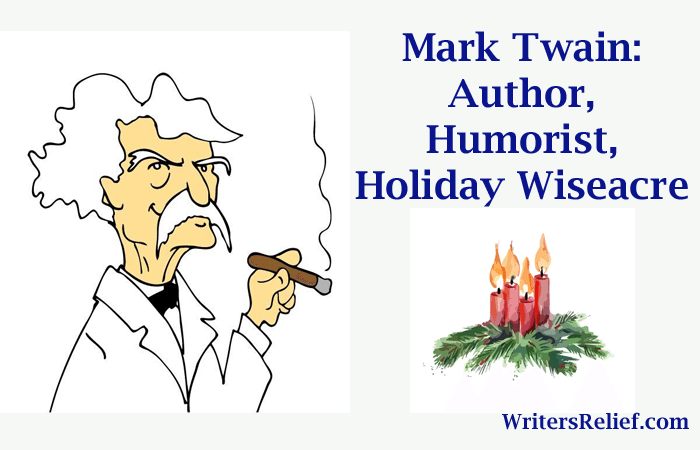 It is my heart-warmed and world-embracing Christmas hope and aspiration that all of us, the high, the low, the rich, the poor, the admired, the despised, the loved, the hated, the civilized, the savage (every man and brother of us all throughout the whole earth), may eventually be gathered together in a heaven of everlasting rest and peace and bliss, except the inventor of the telephone. — Mark Twain, Christmas greeting, 1890

American author and humorist Samuel Langhorne Clemens, better known by his pen name Mark Twain, is famous even today for his sly, quick-witted quotes. We think Twain would be shocked by how ubiquitous phones have become (especially smartphones!). And while we don’t share his obvious disdain for the telephone, we’d like to share these interesting facts about Twain, the author of The Adventures of Huckleberry Finn, one of the most widely read novels of all time.

2. In 1846, when Twain was eleven years old, his father died of pneumonia. To help support his family, Twain quit school after the fifth grade and worked as a printer’s apprentice with the Hannibal Journal.

3. During the Civil War, Mark Twain joined a Confederate militia known as the “Marion Rangers.” The militia disbanded after approximately two uneventful weeks.

6. He chose the pen name “Mark Twain” due to his experience as a licensed river pilot. The term “mark twain” means it is safe to sail because the water’s depth is two fathoms, or twelve feet.

7. Twain’s first claim to fame was an article titled “The Celebrated Jumping Frog of Calaveras County,” written in 1865 for the New York Saturday Press. The story was also published under its original title, “Jim Smiley and His Jumping Frog.”

8.  Mark Twain published his first book, The Innocents Abroad, with the American Publishing Company in 1869. It became one of the best-selling travel books of all time.

9.  In February of 1870, Mark Twain married Olivia Langdon, the daughter of a rich New York coal merchant. Writing to a friend shortly after his wedding, Twain noted: “I have … the only sweetheart I have ever loved … she is the best girl, and the sweetest, and gentlest, and the daintiest, and she is the most perfect gem of womankind.” The two enjoyed thirty-four years of marriage before Olivia passed away on June 5, 1904.

10. From 1901 until his death in 1910, Mark Twain was the vice president of the American Anti-Imperialist League.

QUESTION: Which Mark Twain story is YOUR favorite?

← 'Tis the season... These Self-Published Books Were Turned Into Movies →