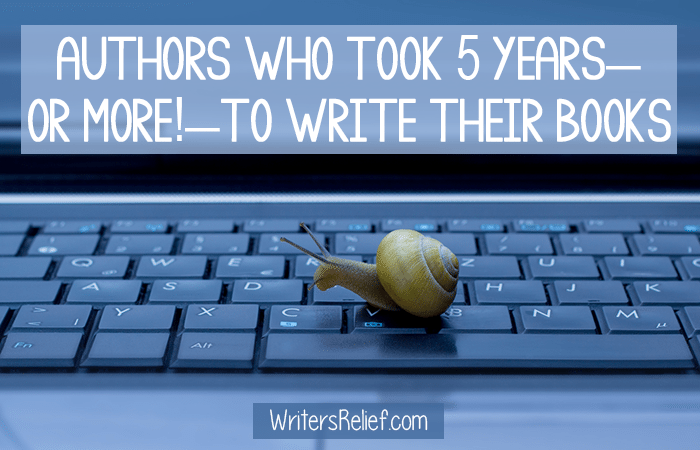 Are you worried you take too long to write? While other authors seem to write complete poems, stories, even books (!) in just weeks, are you still slowly writing and editing one piece? Don’t despair—you’re in good company! Check out this list of wildly successful authors who prove slow writing can be great writing:

Southern belle Margaret Mitchell took ten years to write her beloved classic, Gone With the Wind (1936). Mitchell was extremely secretive about her writing, initially penning the story only to occupy her mind while she healed from an ankle injury. Though she actually never intended to publish her book, millions of readers are glad she did—and the time she took to hone her craft definitely helped!

Díaz also took ten years to write his debut novel, The Brief Wondrous Life of Oscar Wao (2007). Díaz, who had previously only written short story collections, reports that he wrote every single day for five years and continually got stuck after reaching the seventy-five-page mark. While many writers would have thrown in the towel, Díaz simply took a break and then came back to his novel. That perseverance was rewarded with a Pulitzer Prize!

Internationally adored writer and activist Maya Angelou took fifteen years to write the final volume of her autobiography—and with a life as rich as hers, how could anyone blame her? Angelou admits that A Song Flung up to Heaven (2002) only covers a span of four years because so many painful occurrences befell her and the entire African-American community during that time. She was determined to record events down to the last detail—readers and critics would agree that she succeeded.

Rowling, arguably the biggest breakout writer of our time, took five years to plan the story of Harry Potter…before she even started writing the first book! She knew not only the characters and overarching plot of the series, but the backstories of the wizarding world and all the laws that governed it. Some of her notes were extensive, such as the biographies of each character; others were succinct plot diagrams—but all of her plans were meticulously detailed. Though of course certain plot points eventually strayed from her original plan by the time she actually finished all seven books, the time spent planning allowed her to weave such a successful storyline!

This list must include Tolkien, who universally frustrated fans when he released The Hobbit (which took seven years in itself), then took a whopping sixteen years to write the sequel—and even longer before it was finally published! Tolkien’s years working on the next installment of life in Middle Earth was at least as much editing as writing—what is now known and loved as The Lord of the Rings trilogy started off as one very long book. Nearly obsessive in his attention to detail, the writer was a self-proclaimed perfectionist. To this day, Tolkien’s books are lauded for their thoroughness and the expansiveness of their background information.

So you see…slow writing may pay off!

QUESTION: Do you consider yourself a slow writer? What success stories help you keep writing?

← Looking For A Deal On Your Next Summer Read? 6 Misconceptions About Literary Journals That Could Cost You An Acceptance →