Interview With An Author: Jamie Ford

by Writer's Relief Staff | May 13, 2015 | Interview With An Author, Other Helpful Information, The Writing Life | 17 comments 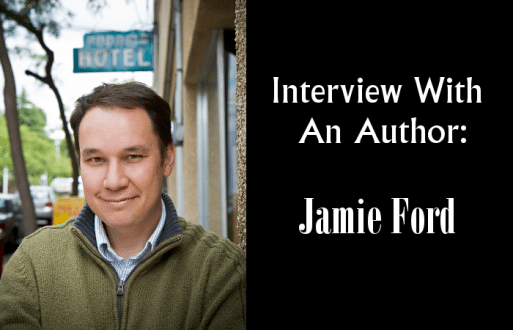 Jamie Ford is the author of the New York Times best-selling novel Hotel on the Corner of Bitter and Sweet, which won the 2010 Asian/Pacific American Award for Literature and has been translated into thirty-four languages. Having grown up near Seattle’s Chinatown, Ford now lives in Montana with his wife and children. Jamie’s latest novel Songs of Willow Frost was published in March 2014.

CONTEST: Leave a comment below by May 20th, and you’ll be entered to win a copy of Jamie’s book Songs of Willow Frost! U.S. residents only. This contest is now closed. Congratulations to our winner, Janet! Thank you to all who participated!

In a blog post back in January, you wrote that you were very close to finishing your next book, which you described only as “heartmelting.” We’re intrigued; will you tell us a little more about it?

*dancing wildly about my office*

Ah, the heartmelting thing. Hmmm…I guess I see storytelling in terms of banking and spending emotional currency. So this new one is going to make some withdrawals with the reader along the way that will be paid off in the end—hopefully with interest.

In 2006 I was accepted to Orson Scott Card’s Literary Boot Camp, and also the Squaw Valley Writers Conference. Both were incredibly helpful—just being immersed in the biz, surrounded by other writers, was amazing. Also, having the best agent in the business helps (I’m looking at you, Kristin Nelson).

If you’re comfortable being accessible, then by all means do it, and do it sincerely. I love it. And it can help with top-of-mind awareness—but it’s easily overdone. No one wants to follow someone on Twitter who’s pimping their book 24/7.

My second book was a challenge, because suddenly I had the new expectations of an agent, an editor, a publisher, readers in dozens of countries—it was a very self-conscious undertaking.

But I went back to a quote from Harlan Ellison: “Write for the wisest, wittiest, most intelligent audience in the universe. Write for yourself.”

Don’t be a writer, be a storyteller.

About Songs of Willow Frost

Twelve-year-old William Eng, a Chinese American boy, has lived at Seattle’s Sacred Heart Orphanage ever since his mother’s listless body was carried away from their small apartment five years ago. On his birthday, William and the other orphans are taken to the historic Moore Theatre, where William glimpses an actress on the silver screen who goes by the name of Willow Frost. Struck by her features and her voice, William is convinced that the movie star is his mother, Liu Song.

Determined to find Willow and prove that his mother is still alive, William escapes from Sacred Heart with his friend Charlotte. The pair navigates the streets of Seattle, where they must not only survive but confront the mysteries of William’s past and his connection to the exotic film star. The story of Willow Frost, however, is far more complicated than the Hollywood fantasy William sees onscreen. Shifting between the Great Depression and the 1920s, Songs of Willow Frost takes readers on a sweeping emotional journey that will resonate with anyone who has ever longed for family and a place to call home.

CONTEST: Leave a comment below by May 20th, and you’ll be entered to win a copy of Jamie’s book Songs of Willow Frost! U.S. residents only. This contest is now closed. Congratulations to our winner, Janet! Thank you to all who participated!