by Writer's Relief Staff | Oct 15, 2014 | Interview With An Author, Other Helpful Information, The Writing Life | 28 comments

A two-time United States Poet Laureate, Ted Kooser is the author of eleven full-length collections of poetry, including Weather Central and Delights and Shadows, winner of the 2005 Pulitzer Prize. His first book of prose, Local Wonders: Seasons in the Bohemian Alps, won the Nebraska Book Award for Nonfiction in 2003. His writing has appeared in many periodicals, including The Atlantic Monthly, The New Yorker, Poetry, The Hudson Review, The Nation, The American Poetry Review, The Kenyon Review, Prairie Schooner, and Antioch Review. He has received two NEA fellowships in poetry, the Pushcart Prize, the Stanley Kunitz Prize, The James Boatwright Prize, and a Merit Award from the Nebraska Arts Council.

CONTEST: Leave a comment by October 22, and you’ll be entered to win a copy of his new book, Splitting an Order! U.S. residents only. This contest is now closed. Congratulations to our winner, Ray Dillard! Thank you to all who participated!

You have taught poetry for many years.  What are the key traits that indicate a student could become a great poet? What makes a poem stand out in the classroom?

I’d rather avoid the word “great” and substitute “an effective.” Only the passage of decades can identify greatness. When I work with a student who loves to play with (or in) language and who can do it in a way that might powerfully move the emotions of a stranger, then we have someone to watch.

On your website’s “Poems” page, you list just six of the many hundreds of your published poems. How did you decide on these few?

Actually, I didn’t decide on those—the people who assembled the website for the university did that. I was happy somebody would go through all that work on my behalf and would have gone along with anything that wasn’t downright embarrassing.

Your imagination has been called “naturally metaphorical.” In your poem “In an Old Apple Orchard,” the wind is an old man who heads to town late and returns the next morning reeling with bees. In your poem “Memory,” the nib of a pen is a tornado that spins and sucks and rattles and peels away to record a farm family’s stories. What tips can you give writers to employ metaphor effectively?

Metaphor is mysterious. It’s impossible to teach someone to make metaphors, and if a poet doesn’t have a talent for it, he or she must employ one of the many other tools. We have noted poets who don’t employ metaphor, and I suspect they may avoid it because it does not come naturally to them. I have had students point to a place in a draft and say, “Don’t you think I ought to put a metaphor right here?” But a metaphor isn’t something that you can pick out of a box and plug in. It magically arises out of the depths of the mind, for me, most usually while I’m in the process of writing.

Your American Life in Poetry project encourages newspapers and online publications to include more poetry for their readerships. Do you think there is a place for poetry in television programming—for example, perhaps a “Tonight’s Poem” slot on The Tonight Show or a “Last-of-the-Week Poem” on CBS This Morning?

I think it would be wonderful if that were to happen, though people who are watching most late-night shows are looking to laugh, and to laugh at everything that anybody says. I think a poem about the death of a loved one or the horrors of war wouldn’t be appropriate for a venue like that.

When you were Poet Laureate, you held a talk at the Library of Congress about songwriting with folksinger John Prine. What are your thoughts on having your poems set to music?

I have no musical ability and couldn’t write a tune to save myself, but quite a number of my poems have been set to music by composers. The composer Maria Schneider recently took nine of my poems from Winter Morning Walks and set them to beautiful music. The CD won three Grammys; I was delighted.

What is it about writing poetry that gives you the most joy?

It happens when I am sitting with my notebook, picking away at a poem, and suddenly something wonderful unexpectedly rushes in from my blind side and I exclaim, “Yowie! Did I just write that?”

Your most recent book, Splitting an Order, had an incubation period of approximately ten years. Do you write every day? Can you talk a little bit about the intersection of patience and the writing life? What else would you like us to know about your new book?

I do try to write every morning, and I fail to write anything of merit maybe twenty-eight days out of every month. But on a couple of days, I might write something that I think will have some endurance and mean something to other people. If I’m not sitting there with my notebook when the good ones mysteriously arrive, I’ll miss them completely.

About a third of the poems in my new book emphasize the ways in which people come together to help each other through life. The title is drawn from a poem in which we see an elderly couple splitting a sandwich at a restaurant. We’ve all seen that happening. There’s another poem I’m quite fond of in which I describe a couple pulling off the road to change drivers. And another about a middle-age son and his elderly father holding hands as they descend a staircase.

What are your hopes for the future of poetry?

I hope that more and more people can be led to discover the pleasures that poetry offers. Too many people get through their whole lives having completely missed out on that. During the past hundred years, the elitist literary authorities have celebrated poetry that was very often baffling to ordinary readers; that almost totally excluded them and which seemed to be making an effort to do just that. Poets can be of service to individuals, to communities, to nations. If they really want to be of service to broad general audiences, they have the skills (and the generosity) to do just that. Perhaps the authorities can be persuaded not to elbow their way to the front of the procession, but to respectively follow—though that’s a tall order.

About Splitting An Order 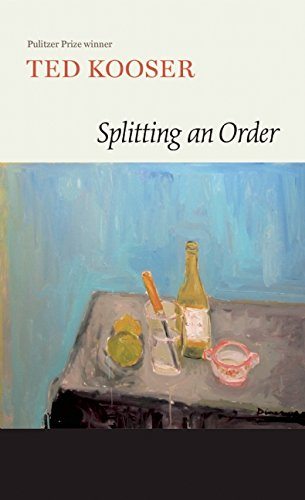 Pulitzer Prize winner and best selling poet Ted Kooser calls attention to the intimacies of life through commonplace objects and occurrences: an elderly couple sharing a sandwich is a study in transcendent love, while a tattered packet of spinach seeds calls forth innate human potential. This long-awaited collection from the former U.S. Poet Laureate—ten years in the making—is rich with quiet and profound magnificence.

From Splitting an Order:

I like to watch an old man cutting a sandwich in half
… and then to see him lift half
onto the extra plate that he asked the server to bring,
and then to wait, offering the plate to his wife
while she slowly unrolls her napkin and places her spoon,
her knife and her fork in their proper places,
then smoothes the starched white napkin over her knees
and meets his eyes and holds out both old hands to him.

For more information on Ted, you can visit Blue Flower Arts or his website.

CONTEST: Leave a comment by October 22, and you’ll be entered to win a copy of his new book, Splitting an Order! U.S. residents only. This contest is now closed. Congratulations to our winner, Ray Dillard! Thank you to all who participated!

Thanks to B. Goodwin for your help with this fantastic interview!

← The Anatomy Of A Literary Agency Contract : How Six Short Clauses Can Control Your Writing Career ProofNEEDing: We all make mistakes... →