5 Things Novelists Can Learn From Screenwriters 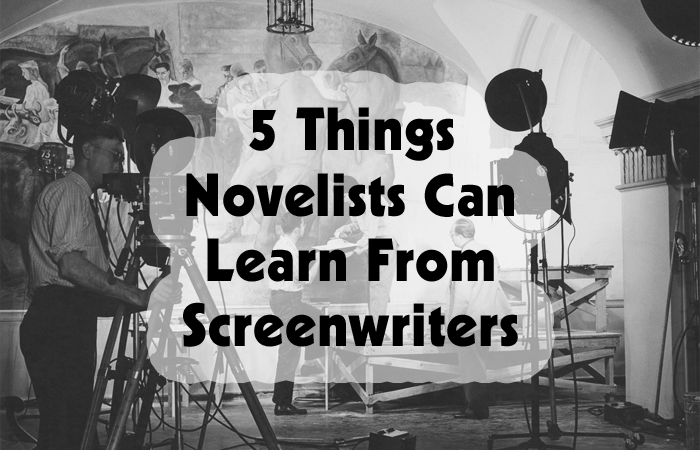 Bookworms and movie buffs have long been considered two different breeds of people. There are those who will always claim that “the book was better,” and then there are people who see a movie in every book that they read.

Oh, and don’t get some people started on modern renderings of classic novels.

But the truth is, the core of any movie is the writing. If there’s a character you love, you can thank the writer for him or her. Did a particular bit of dialogue blow your mind? Boom. Writer. Even the tension you feel when watching a suspenseful movie can, in part, be credited to the writer.

Here are a few things novelists can learn from the art of screenwriting.

1. Structure is everything.
According to the late Syd Field, author of Screenplay and The Screenwriter’s Workbook, the standard screenplay can be divided into three parts (or acts):

These acts are typically separated by two major plot points, both of which propel the story toward the climax at the end of the film. In many movies, this resolution is a huge catharsis for the audience—the result of the tension finely strung throughout the other acts.

The same concept of structure can be applied to a novel. A good story doesn’t meander aimlessly from moment to unrelated moment in the hopes of making sense in the end—it needs a path to follow. Otherwise, readers will get lost or, worse yet, lose interest.

2. Cut to the chase.
One page of a screenplay equals one minute of screen time. Most films are either 90 or 120 minutes long, so that’s exactly how many pages the writer has to tell the story.

Every minute counts. If a film’s plot isn’t apparent within the first ten to fifteen minutes, the audience will lose interest. And if too much of the 90- or 120-minute window is wasted on long, pointless scenes, there won’t be enough time to develop the rest of the story properly or resolve it without rushing.

Similarly, every page of your novel counts, especially at the very beginning. Many readers—and literary agents and editors—make snap decisions about whether or not they’ll read a book based on the first few pages.

Don’t waste those precious pages describing how dark and cloudy the sky is. Introduce your characters. Establish the tone. Set up a story that’s going to knock their socks off, starting on page one.

Read More: Why Your Opening Pages Are Key To Landing A Literary Agent, Part One

3. Develop your characters.
Screenwriters have a particular knack for coming up with good characters because they have to. After all, no one is going to sit around staring at a screen for two hours without having some emotional interest in or connection to the characters.

The same is true for a novel.

Don’t let your plot overpower the fact that your characters are three-dimensional beings. When a reader is depending on your words to create a solid mental image and an emotional connection, the dimension you provide is particularly important. An amazingly well-developed character will go a long way in terms of keeping those pages turning.

4. Every scene is important.
Have you ever watched a movie where nothing happens? The characters meet in the middle of the screen, sling some pointless dialogue back and forth, and part with nothing changed. Most of us would consider that a bad movie.

So why do the same in your novel? Every scene you write should propel the plot forward, always in the direction of the resolution. If it doesn’t, then it needs to be cut.

Cutting the scenes you love isn’t easy for novelists or screenwriters, but it’s a necessary evil. Not only will this keep your word count in check, it will also keep your story lean and the tension high so that readers are strung along every step of the way.

5. Write it so they can see it.
Showing is telling. Screenwriters don’t have the luxury of writing everything out for their audience, so they have to reveal information through nuanced action and dialogue. When a movie is being made, the director and the actors need to be able to see and hear the film through the words on the page. Otherwise, the scene won’t work as the writer intended.

Novelists have a similar obligation to their readers. If your entire book consists of back-and-forth dialogue with no description of the simultaneous action, no one is going to know what’s going on. On the flip side, it’s hard to truly empathize or identify with characters in a book of all action and no dialogue.

But be careful not to spell out everything in minute, mind-numbing detail. Trust that your audience is smart enough to pick up on subtle clues. Rather than telling them that the protagonist is anxious, add stutters in the dialogue. A book that can be easily visualized will make a longer-lasting impression on a reader.

QUESTION: Has a movie ever inspired you to write a book, story, or poem?

← 2013: In Memoriam Interview With An Author: Ginnah Howard →