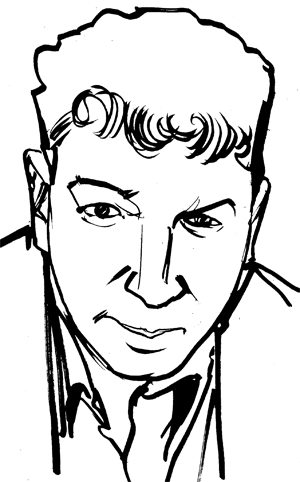 This month’s Industry Influencer is Ron Hogan, curator of Lady Jane’s Salon in NYC as well the lit journal that helped launch the digital literary age back in 1995, Beatrice! He talked with Writer’s Relief about the online literary market, online author platforms, his favorite social media, and offered some helpful tips for bloggers.

Let’s give a warm welcome to Ron! Enjoy!

Ron, you started one of the oldest online literary magazines back in 1995, Beatrice. And it’s still going strong! What’s changed about the online lit mag market since then?

Well, the first thing that’s changed is that now there IS an online lit mag market.

Actually, now that I’ve spent some time thinking about what things were like back in 1995, I do remember some early general interest and arts/culture websites floating around. So I think a major part of what’s changed, in the two decades that “new media” has simply become “online media” or “online publishing,” is a stronger sense of the economic realities of this field.

When “Web pages” first became a thing, there was a distinctly revolutionary vibe to their growth, a belief in the power of DIY media to rise up and overthrow the existing media conglomerates. Some of that had to do with the rise of zines in the print world and a desire to carry that momentum over into the Internet. And though there are several significant players in the media world today who didn’t exist in 1995, it’s also true that the conglomerates have managed to absorb the challenge by co-opting their own share of the online media landscape.

That applies to the subsection that constitutes “literary” media as well as to the larger field. People who want to be innovative publishers, but saw what happened when the dot-com bubble burst, seem to be taking a more careful approach this time around. They focus on one really good idea at a time, whether it’s a content platform or a form of content, and recognize that success isn’t necessarily going to come overnight.

The good news, though, is that ANOTHER thing that’s changed over the last two decades is that “online” is now widely accepted as a suitable place to find reading material, whether we’re talking about buying books (print or digital) through e-commerce outlets or finding sites that publish great content. We no longer have to convince people that there’s great stuff here; we just have to convince them that we’ve got the great stuff.

You’re known as a consultant to publishers and authors who want to develop their online platforms. What do you think is the biggest mistake that “new” writers make in approaching online publicity?

One of the greatest problems writers face in doing online publicity and marketing is in hoping for too much too soon. I usually recommend that writers begin seriously thinking about establishing and cultivating their online presence as soon as they sign a book contract—if they don’t already have one by then—because then they’ll likely have 18–24 months to start reaching out to their audience and attracting fans—people who will already care about them by the time the book is out.

Part of the problem comes from thinking about things in the old print-publicity model, which was designed to catch the attention of a small network of newspaper and magazine section editors who were working on regularly recurring cycles. So it was all about getting THEM to notice the book during a window of however many months before the book’s publication date when a given editor was planning out the corresponding issue. (Monthly magazines had different windows than weekly magazines, which had different windows than daily newspapers.)

That model still gets a solid workout, but it’s not as effective for reaching readers directly, because very few, if any, of us actually plan out our reading by what’s going to be published next month. We’re interested in certain types of stories or information about a particular subject, and those interests are often NOT time-specific.

So your goal as a writer, in terms of directly reaching out to a reader, is to make the initial connection as soon as possible and cultivate it over time, so they’re already familiar with YOU when your book is finally out.

What’s your favorite social network for authors who hope to build an audience?

Each form of social networking has its strengths. Some people are able to build up a huge following being epigrammatic on Twitter, while others use it to steer people toward (much) longer blog posts, and some of those blog posts become the starting point for extensive conversations with (or between) readers through the comments section.

The key, though, isn’t so much “which network will help me build the biggest audience?” as it is “which network is the one where my target audience is most likely to be found?”

You’re one of the founders of Lady Jane’s Salon, a first-of-its-kind reading series for romance authors, as well as a regular participant on the scene with Brooklyn’s Greenlight Bookstore. Clearly, you know your way around the publishing biz, online and in person. What’s your feeling about online marketing and PR vs. good old-fashioned hand-shaking?

I don’t think there’s a meaningful distinction between them anymore. I’m a firm believer in the Seth Godin philosophy of marketing, which is that marketing is (I’m paraphrasing) a function of doing something that you believe in so strongly that you can’t help but want to tell other people about what you’re doing in the hopes that they’ll get it—and, ultimately, becoming smarter about recognizing who out there in the world IS likely to get it. It’s all marketing; only the specific tools and techniques are different.

You’re a well-known blogger, and you’ve got a great following. What’s your favorite tip for an author developing his/her blog?

Find a subject that you’re genuinely passionate about, start writing, and stick with it. It takes time for other people to recognize what I call your “authoritative passion” or “passionate authority,” but if it’s a subject they care about, and they recognize that you care about it so strongly that you’ve developed a meaningful perspective on it, they will come to see you as an authority on that subject, and they’ll likely want to read more from you. So you have to be willing to put the time in.

QUESTION: How do YOU effectively market yourself as a writer?