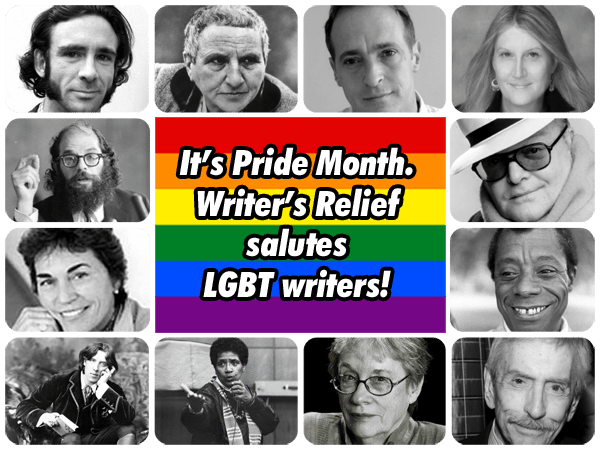 June is LGBT Pride Month, and so we’re here to celebrate LGBT writers and literary magazines.

Writers of the LGBT community have long had a profound impact on literature of all kinds. To commemorate their contributions and Pride Month, here’s our (abbreviated!) list of famous GLBT writers (and/or writers who have expressed attraction toward people of the same gender).

Alan Hollinghurst (b. 1954), English novelist, wrote The Line of Beauty, winner of the 2004 Booker Prize

List of Literary Journals And Magazines Dedicated To GLBT Writers

Gay, lesbian, bisexual, and transgender writers are fortunate these days because there are a good number of literary journals dedicated to LGBT issues and writings. Here are just a few of the many that are out there (and accepting submissions!):

Assaracus – The only print journal in the world dedicated to poetry of gay men.

Bloom – An active journal that was “founded to support the work of lesbian, gay, bisexual, and transgendered writers and artists and to foster the appreciation of queer literature and creation.”

Blithe House Quarterly – An online mag with a tagline that says it all: “queer fiction lives here.”

Gay & Lesbian Review – This lively magazine has a broad scope and a strong mission: to “provide a forum for enlightened discussion of issues and ideas of importance to lesbians and gay men; to advance gay and lesbian culture by providing a quality vehicle for its best writers and thinkers; and to educate a broader public on gay and lesbian topics.”

Gertrude – This nonprofit is intent on “showcasing and developing the creative talents of lesbian, gay, bisexual, trans, queer-identified, and allied individuals.”

Lavender Review – Established in 2010, this literary journal is “an international, biannual e-zine dedicated to poetry and art by, about, and for lesbians, including whatever might appeal to a lesbian readership.”

Mary – An online lit mag whose mission is “to showcase Queer/Gay writings of artistic merit.”

Polari Journal – A journal to showcase emerging, developing, and established writers as a means of bringing readers and writers together in mutually enriching ways. Polari publishes the best writing by and about LGBT persons.

RFD – This unique magazine is “a country journal for gay men everywhere.”

Sinister Wisdom – According to the site, this is “the oldest surviving lesbian literary journal—now celebrating 30 years.”

QUESTION: Do gay and lesbian characters ever play a role in your writing? Feel free to add to our list of LGBT poets and writers in the comments below.

← Poet Susanna Rich’s Advice For Writers: Taking The Show On The Road Writer Business Cards: 5 Ways To Think Outside The Box →