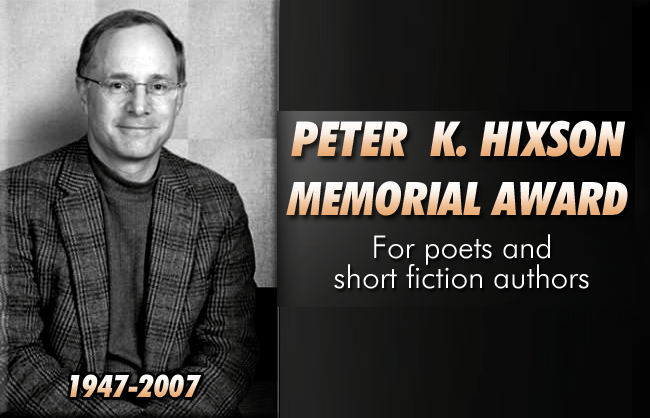 Peter K. Hixson (1947-2007) was a much-beloved client of Writer’s Relief. Peter’s creative roots were evident as far back as the third grade, when an encounter with an encouraging teacher fueled his passion for poetry. His interest developed in earnest in high school as a cathartic means for dealing with the death of his high school soul mate on Christmas day.

Peter’s love of art and learning led him to become a real “Renaissance Man.” He earned a PhD in speech-language pathology from Purdue University and spent his professional career developing programs, teaching, doing research, mentoring others, and serving as President of the Rochester Hearing and Speech Center, a large community nonprofit agency in upstate New York. For thirty years Peter also pursued his avocation as a dancer and choreographer. Later in life he enjoyed success as a woodworker, a volunteer fireman, a community volunteer, and a formidable tennis player. Apart from his many academic publications, Peter’s creative writing appeared in Concho River Review, Lynx Eye, The MacGuffin, North Atlantic Review, RE:AL, The Texas Review, and Whiskey Island Magazine.

When we at Writer’s Relief heard the news of Peter’s passing, we all grieved. Peter’s dedication was a true inspiration: In his writing, he was never afraid to tackle important issues, but he also had a lyrical and playful outlook.

Not only was Peter a talented writer, he was a caring and generous individual. His success in using our services inspired him to create a fund so that up-and-coming writers might have the opportunity to advance their careers with the help of Writer’s Relief.

Peter’s bequest of this award was an act of exceptional kindness and generosity. In spite of our sadness over his death, he continues to inspire us. Peter’s twin brother, Doug, notes, “I think his idea for a writing award grew from his understanding of how difficult it is to get published without losing hope.”

And in the words of Peter’s wife, Lois, “Peter often counted on the encouragement and support of the Writer’s Relief staff when he hit periods of discouragement that his writing would ever be of interest to anyone. Had an award like this been available to him, I believe he would have jumped at the opportunity and, once involved, would have found a way to stay connected because he so valued the help and encouragement he received.”

With funding from Peter’s estate, and this year additional contributions from family members, we at Writer’s Relief are deeply honored to offer the Peter K. Hixson Memorial Award for Creative Writers.