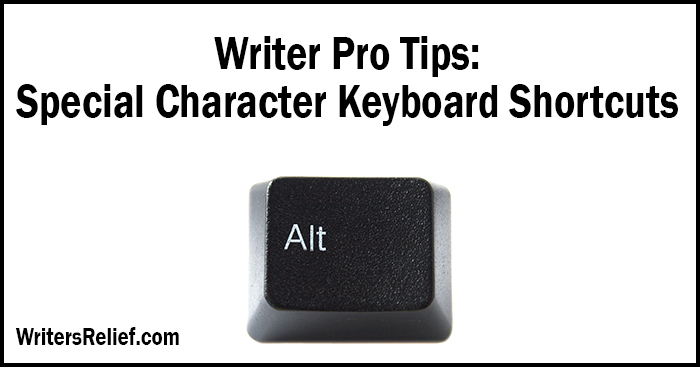 At Writer’s Relief, we know there can be nothing more daunting than finding the special character or symbol you need to properly convey your message. Sure, you can type seventy-five degrees or Copyright 2019 Writer’s Relief, but that can become inconvenient for the writer and just as overwhelming to the reader. So we’re going to show you how to easily type special characters without the need to open the Character Map (or, for our Mac users, the Keyboard Viewer and/or Character Palette). Ready? Let’s go.

Getting special characters and symbols to display begins with pressing and holding the ALT key while typing a combination of numbers on the keypad (usually found on the right side of your keyboard—not the number keys in the top row!). For Macs, the option key replaces the ALT key, followed by a corresponding letter or key combination.

Let’s take a look at how to type some of the more common special characters and symbols:

If you’re aspiring to be the next John Grisham or Paul Madriani—or even if you’re just helping out a lawyer friend with his or her paperwork—you may need to type a legal symbol. The most common symbol in legal writing is §, which stands for “section.” In years past (and unless we had access to a printing press), we would have to type either the word “section” or, more commonly, “SS,” to denote a legal section. Now, it’s as simple as holding down the ALT key and typing 0-1-6-7 on the number pad! For Mac users, you hold down the option key and type 6.

Copyright and trademark symbols are also some commonly used special characters. Instead of typing (c) to designate copyright, you can hold down the ALT key and type 0-1-6-9 (Macs use option+g) to get the © symbol. Registered trademarks (®) can be typed with ALT+0-1-7-4, or option+r on a Mac. Trademarks, or words, names, or logos that represent a company that makes a product, can be designated with a ™ symbol. Instead of typing “TM,” ALT+0-1-5-3 (or option+2 on a Mac) will create this symbol.

The odd man out is the symbol for a service mark. A service mark is used for words, names, or logos that represent a company that provides a service. Instead of simply typing “SM,” you can type an ℠ by typing 2-1-2-0 and then immediately typing ALT+X. Sorry, Mac fans, you’ll have to use the Character Palette for this one.

While we may not be quoting Fermat’s Last Theorem, most writers may need to represent more than just addition and subtraction in their prose from time to time. Here are some symbols that will take your writing a step or two above basic level.

Equals sign. We all know how to indicate that something equals something (=); it’s that key normally to the left of your backspace key. But there are also variations of this symbol that you may find helpful in expressing your thoughts without using unnecessary words. You can say that one thing is almost equal to another (≈) by using ALT+8-7-7-6, or option+x on a Mac. Something can not equal something (≠) with ALT+8-8-0-0 (or option+= on a Mac). Finally, if you want to really impress, you can indicate that one thing is identical to another with the ≡ symbol, which you can type by using ALT+8-8-0-1. Alas, Mac users have to resort to the Character Palette to use this character.

Greater than/less than. Some may remember when the greater than (>) and less than (<) symbols lived above the numbers in the top row. Now they are located to the right of the M on the keyboard and can be displayed simply by holding the SHIFT and tapping the key. But what if a thing is greater than or equal to another? Well, you can waste precious keystrokes by spelling it out. That’s annoying. Or you can really confuse your readers by typing >= or <=. Probably not the best way. Or you can use ALT+2-4-2 (or option+. on a Mac) for greater than or equal to (≥) and ALT+2-4-3 (or option+, on a Mac) for less than or equal to (≤).

Got pi? There are literally thousands of mathematical symbols at our disposal, but let’s take a quick look at some of the more obscure. As we mentioned above, it can be inconvenient and time-consuming to type the full word for a symbol we can easily obtain with a few keystrokes. For example, it is much easier to type 75° (that’s the degree symbol, which can be typed by using ALT+0-1-7-6, or option+shift+8 on a Mac) instead of seventy-five degrees. We can reach infinity (∞) by typing ALT+8-7-3-4, or option+5 on a Mac. Plus or minus (±) is as easy as ALT+0-1-7-7, or option+SHIFT+= on a Mac; and ALT+2-2-7 (or option+p) will get you a nice little slice of pi (π). And for those of us who remember a time before we used a forward slash to indicate division, you can type ALT+0-2-4-7 (or option+/) to get the old-school division symbol (÷).

The topic of money often appears in writing. When we’re discussing the American currency symbol, it’s a piece of cake. (We really should open a bakery with all these sweets.) All you need to do to get the almighty dollar sign ($) is type SHIFT+4. But what if we are discussing an amount less than a dollar? Or foreign currency? How do we handle these things?

As typewriters grew less popular and word processors and computers became all the rage, we seemingly gave up the cent sign. With everything we gained with modern technology, this loss seemed rather small (pun intended!). We’ve grown used to writing amounts less than a dollar as “$.01”. But for those of us who miss the archaic symbol, we’re in luck! Simply type ALT+0-1-6-2 (or option+4), and ¢ appears. Now, if only we could make a fork for the cake and pi appear just as magically.

With so many languages and so many ways to type them, there are thousands of accented characters—far too many to cover in this article. We will, however, review the most common.

The diacritic is a little mark above or below a letter that denotes a change in pronunciation, such as: é. To get this symbol, simply type ALT+1-3-0, or option+e on a Mac.

Another common foreign character is the German Eszett, or Scharfes (ß). This can be typed with ALT+0-2-2-3, or option+s on a Mac.

For your convenience, we’ve included a handy cheat sheet outlining all of these character shortcuts. Remember: There are literally thousands of special characters and symbols at your disposal. Experiment in a blank document by pressing ALT or option and typing three or four random numbers or letters. The results will surprise you!

Question: Which keyboard character shortcut do you use the most?

Online submission managers have revolutionized how writers submit work to literary journals. Nowadays, with just a few clicks of your computer mouse, your writing is instantly whisked into the queues of waiting editors. Since Writer’s Relief has been helping authors make submissions since 1994—the days of SASEs and postage stamps—we know firsthand the benefits of… END_OF_DOCUMENT_TOKEN_TO_BE_REPLACED

It’s every writer’s nightmare: You’ve finished a short story you’ve been struggling with, or the second revision of your novel, or the final proofreading and editing of your poems—and you lose everything. Maybe your laptop chose that moment to go kaput, or your desktop lost power before you had a chance to hit “Save.” Perhaps… END_OF_DOCUMENT_TOKEN_TO_BE_REPLACED 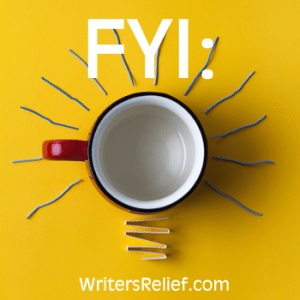 The publishing industry website GalleyCat recently featured an infographic that Pens.com created touting the benefits of writing by hand vs. using a keyboard. You can see it here.       QUESTION: Do you write with a pen, pencil, computer keyboard, or old-school typewriter? Let us know!   END_OF_DOCUMENT_TOKEN_TO_BE_REPLACED 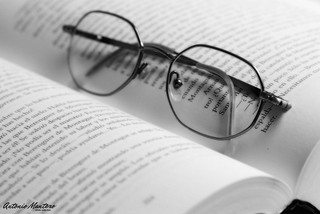 Imagine that you are an editor of a literary journal. You pore over hundreds of submissions over a number of months in an effort to find a handful to publish. You fall in love with many dozens of submissions—perhaps more—but painstakingly whittle down your favorites to just the few you have room to publish. With… END_OF_DOCUMENT_TOKEN_TO_BE_REPLACED