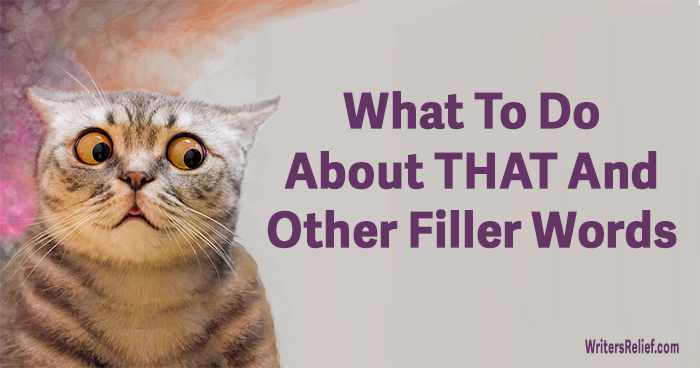 When you’re writing your first draft, you want to focus on the idea for your short story, poem, or book manuscript, and save the editing for later. And that’s smart, because when you reread your draft, you’re sure to notice some filler words in your writing. At Writer’s Relief, our proofreaders have found a multitude of filler words lurking in written submissions. Here’s what to do about “that” and the other filler words weakening your writing.

The filler words you can cut from your writing include That, Just, Basically, Really, and Actually, among others. Basically, there are more that we could mention; but really, we’ll just focus on these.

HA! Did you see what we did there? We stuffed that sentence with filler words. Our shocked blog editor is probably spitting coffee all over the computer monitor. (Editor’s note: It was hot cocoa.)

Good writing should be concise. To see if you’ve included any unnecessary filler words, test the sentence without the word. If it still has the same meaning, you can remove the word (or words) in question. Let’s try it!

Overfilled: Basically, there are more that we could mention; but really, we’ll just focus on these.

Concise: There are more we could mention, but we’ll focus on these.

Even though a word like “just” can sometimes be overused as a filler word, that doesn’t mean it’s incorrect every time. For example:

In this example, “just” lets us know Caitlin’s suspicious activity occurred recently, so it helps establish a time frame. And maybe an alibi.

There are times, however, when “just” is simply a filler word which can be removed without changing the meaning of the sentence.

Filler Word: I just want to be sure the shovel was placed next to the sledgehammer.

Concise: I want to be sure the shovel was placed next to the sledgehammer.

Another word frequently overused as filler is “that.” Often writers don’t even notice how many times “that” sneaks past their inner grammar bouncer and into sentences as filler. There are times when “that” should be used in a sentence, but it’s not as often as we might think.

Filler Word: Jess was sure that she left her holiday sweater on the sofa.

Concise: Jess was sure she left her holiday sweater on the sofa.

Also OK: Put that sweater back where you found it!

Just because a holiday sweater features flashing lights and plays music doesn’t mean you should bury it in the yard, Caitlin.

Sometimes “basically” is a necessary qualifier, but in most cases, you can remove it without changing the meaning of the sentence.

Filler Word: Basically, the flickering lights gave everyone a headache.

Concise: The flickering lights gave everyone a headache.

“Really” can be used to modify an adjective to show intensity. Yes, really! But again, in many instances, it’s an unnecessary filler word.

Instead of using “really,” you can also choose a synonym that conveys a more intense feeling.

The same is true for “actually”—it adds no substantive value. In most cases, you can remove it from a sentence and the meaning remains the same.

Filler Word: Actually, the party was rescheduled for next weekend.

Concise: The party was rescheduled for next weekend.

Cheer up, Dave! You’ll still be able to mingle while wearing your holiday finery.

Sentences with filler words aren’t grammatically incorrect. If you’re writing dialogue, you might include filler words to accurately reflect the natural flow of how people speak. Or you could  include an occasional filler word if your writing style is more informal. But if a sentence reads well without filler words, you can safely remove them. Your writing will be more concise and readable, and you’ll make Papa Hemingway proud. The overall word count will benefit too—readers and editors prefer shorter works!

Can You Start A Sentence With “But” Or “And”?

Who or Whom: An Epic Grammar Battle Easily Resolved

Grammar Tip: When To Use Less Vs. Fewer

Question: Which filler word do you catch yourself using most often?