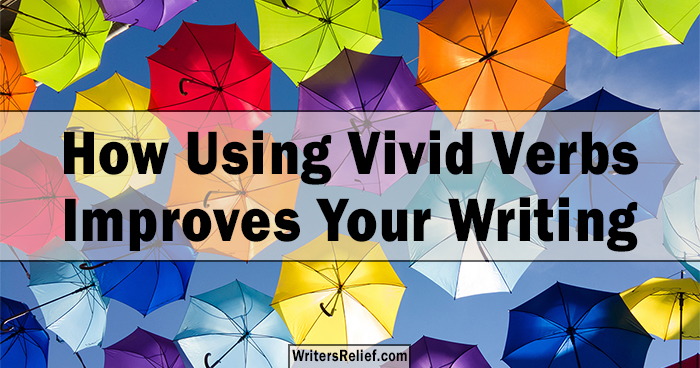 The difference between a successful story and a lackluster one: Show, don’t tell. One of the best ways to ensure your writing “shows” is to paint a memorable, standout picture with your verb choices. At Writer’s Relief, we know the verbs you use can convey more than just action. The right verb can also display emotion, enhance setting, and bring your story to life. Here’s how using vivid verbs improves your writing and keeps your readers engaged and eagerly turning pages.

Vivid Verbs Are All About “Show”

Your reader should be able to see what’s happening in your story or novel, rather than relying on you to tell them. Choose verbs that make it clear what your character is feeling or doing.

The more vivid verb shows how quickly and urgently Wynonna ate the pie. Now your reader is curious: Why is Wynonna eating so quickly? Is she very, very hungry? Or perhaps Wynonna has pilfered someone else’s pie from the fridge. Maybe it’s Rashell’s blueberry pie that she was saving to eat after tacos.

Ho-hum verb: David looked for his phone; he found it under the couch.

Vivid verb: David searched for his phone; he found it under the couch.

Here, the vivid verb adds a subtle level of anxiety to David’s quest. Why is David so intent on finding his phone? Is the bakery having a one-day blowout sale on blueberry pie?

When you use vivid verbs, you can describe more concisely what’s happening in a scene. Instead of loading up on adjectives, use a well-chosen, vivid verb to bring your scene to life! This helps grab the reader’s attention and also keeps your word count in check—which in turn helps your story stay within the guidelines of more literary journals and specific genres.

Ho-hum verb: Carol walked very quickly toward the exit of the bakery.

Vivid verb: Carol flew out of the bakery.

Obviously, Carol purchased the last blueberry pie and wanted to get away before David came running into the bakery—with fewer words, she gets away more quickly! And while both sentences make it clear Shannon is meandering, it took fewer words to say it using a vivid verb. Plus, Shannon will never find that bakery without a GPS.

Keeping your short story word count to 3,500 words or fewer will allow you to submit your story to more literary journals and boost your odds of getting published! And you want to be sure your book meets the proper word count for your genre. A whopping 130,000-word romance from a new author will have less chance of enticing a literary agent than a 50,000-word manuscript.

In the same way a vivid setting makes it easier to see where your character is, vivid verbs let your readers clearly visualize what the character is doing and feeling. When readers are able to create accurate pictures in their minds, they’re more inclined to stay interested and keep reading.

Ho-hum verb: Vince sat in his chair at the kitchen table.

Vivid verb: Vince slumped in his chair at the kitchen table.

With a more vivid verb, we now know that Vince is sitting dejectedly in his chair. Something has filled him with disappointment. The blueberry pie snatched from the fridge was actually his. Wynonna has much to answer for.

When you use these writing tips to replace dull, ho-hum verbs with vivid, distinct verbs, your writing will be more appealing and engaging—and will keep your audience eagerly reading “just one more page!”

Question: How would you improve a sentence by using vivid verbs?