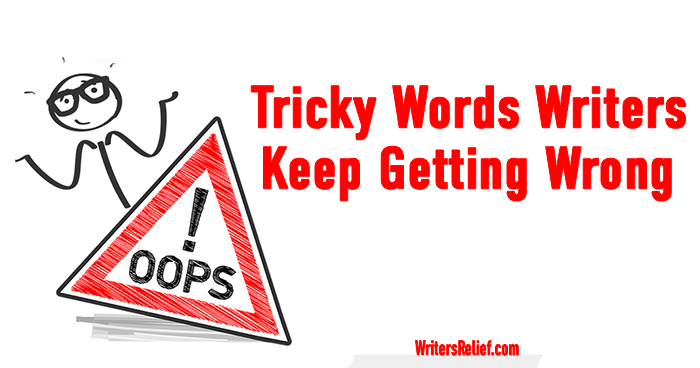 Grammar mistakes are a pet peeve of many writers, but even the most diligent writer will occasionally make a grammar gaffe. And some words seem to be the culprits more often than others! It’s important to carefully proofread your writing to catch these sneaky troublemakers. The submission strategists at Writer’s Relief know that readers, editors, and literary agents will quickly dismiss the quality of your work if they find grammar errors and misspellings. Here’s a list of some commonly confused, tricky words that writers keep getting wrong.

Many writers struggle with choosing between “who” and “whom.” Why? Partly because very few writers from this century use “whom” in a consistent (and mainstream) way. Grammar style guides will state that “who” is used as a subject, while “whom” is used as the direct object of verbs or prepositions. But according to dictionary heavyweight Merriam-Webster, it’s acceptable to use the “ear test”—determine which one sounds right when read aloud. The argument is that even if “whom” is grammatically correct for the situation, if it sounds sticky, it will have the same effect on the reader as if it were wrong.

To learn how to make the correct choice between “who” and “whom,” read more here: Who or Whom: An Epic Grammar Battle Easily Resolved.

At the other end of the linguistic spectrum, we find two words used every day: “your” and “you’re.” Many people confuse these two almost-identical twins, much to the chagrin of English teachers and grammar geeks everywhere. But if you mix up “your” and “you’re” in your writing, it signals to an editor that you probably didn’t proofread your submission.

Briefly: “your” denotes something someone else possesses. “You’re” is a contraction of the words “you” and “are.”

Example: You’re incorrect if you think your tractor is more attractive than mine.

“Effect” and “affect” are often-confused homophones. In simplest terms, “effect” is a noun that refers to a result or consequence. “Affect” is a verb that means to change or alter. Bad weather can affect a crop yield, but the effect of that weather can be famine.

There’s also the noun version of “affect,” but this term is mostly used in psychology. And yes, “effect” can, at times, be a verb meaning to cause or bring about. This grammar article explains more about the tricky twists of “affect” and “effect”: When To Use Affect and Effect: “Affectations Can Be Dangerous.”

With only one letter difference, it’s very easy to get these two words wrong! It might help to remember that “capitol” has only one meaning: a building in which the legislative body of government meets. On the other hand, “capital” has multiple meanings: uppercase letter, accumulated wealth, or the city that serves as the seat of a country’s or state’s government.

Just as murky as the “you’re” or “your” mix-up is the “its” or “it’s” muddle. Many writers, both new and professional, pause before or after they write “it’s” or “its” to confirm they’re making the right choice. The very existence of these two tricksters is proof of a glitch in the grammatical matrix—the apostrophe that typically marks a contraction or the possessive “s” at the end of words create confusion here.

In this case, “its” with no apostrophe is the possessive form and is used to describe when something belongs to something else (usually a genderless entity or organization). Meanwhile, “it’s” is the contraction, a combination of “it” and “is.” To avoid making a mistake, read the sentence you’re writing and substitute “it is” to see if it makes sense. You can see more examples using “it’s” and “its” here (and also get bonus tips about “that” and “which”: It’s vs. Its and That vs. Which.

To avoid tripping over words that are often confused, be sure to always proofread your work before sending it out to literary agents or editors. And the more eyes reviewing your work, the better! You can ask another writer or grammar-savvy friend, or turn to a professional. Learn more about Writer’s Relief’s professional proofreading services.

Question: What other words are easy to get wrong?