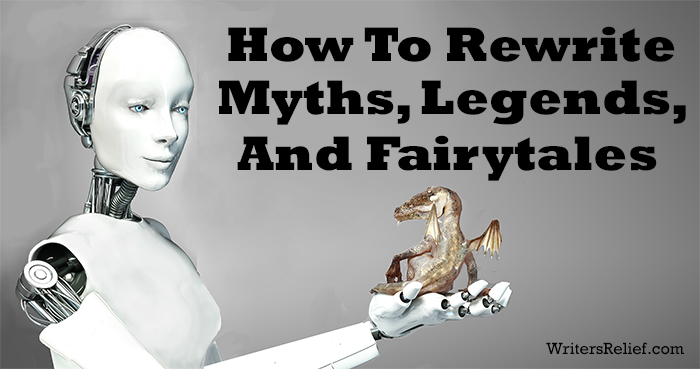 Universal themes can be found in the best fairy tales, myths, and legends, so it’s no surprise many writers would consider folklore a great source for new work. With memorable monsters, gods, goddesses, heroes, underworlds and heavens, secret civilizations, talking animals, magical powers, curses, treasure, epic wars, and journeys, these time-honored tales can provide a jumping-off point for your next short story, poem, or book. At Writer’s Relief, we know there are tricks to successfully updating a classic favorite. Here’s how to rewrite myths, legends, and fairy tales so they are fresh, new, and worth reading.

Since the bones of your story aren’t original, you need to determine what kind of twist or changes you’re going to feature in your retelling that will make it worth reading.

What irks you about the original story? Do you feel a minor character would offer a more interesting view on events? Maybe the princess saves herself from the tower, or the cook, not the wicked queen, is the villain. This is your opportunity to give an old story an interesting, new perspective! Sleeping Beauty has a very different theme and feel when it’s told from the viewpoint of Maleficent.

You can also use the basis of the fairy tale to highlight a social issue. For example, if women were not given a voice in the patriarchal original version, or an impoverished family was swindled with some so-called magic beans, how might you rewrite the story?

How do the characters change in your version? If you’re moving a myth into modern times, the famous archer who robs from the rich and gives to the poor may now be a talented accountant with a philanthropic streak.

Where and when should the story be set? You might set the story in the recent past, contemporary times, or even in the future to see how it plays out differently. Hansel and Gretel would turn out differently if the children were abandoned on a different planet, rather than in the woods. Transplanting the legend of Achilles into the Wild West would inspire a different type of battle scene. You might consider setting a story in a different culture if you see an interesting overlap. Or, you could take a particularly memorable setting and place your own characters into that world.

Must you stay close to the original version? Not really! You don’t have to remain faithful to anything but the theme of the story, if that’s all you want to use. The Odyssey has been retold over and over and over again—but you might not recognize some of its iterations unless you really paid attention! One example is the movie O Brother, Where Art Thou? which sets this classic tale in the 1930s deep South.

Here are a few retellings of classic stories that might inspire you to write your own version of a well-known tale!

Autobiography of Red by Anne Carson

The Golem and the Jinni by Helene Wecker

The Penelopiad by Margaret Atwood

The Mists of Avalon by Marion Zimmer Bradley

Till We Have Faces by C.S. Lewis

Redemption in Indigo by Karen Lord

The King Must Die by Mary Renault

Whether you make a few simple changes to the original story idea or totally rework the entire plot, characters, and setting, keeping the basic premise of a familiar, beloved tale can provide a great starting point for your writing. And since readers may even recognize the classic basis for your work, you might have some built-in fans eager for a new twist on an old favorite!

Question: Which myth, legend, or fairy tale would you like to see retold?