Tips For Writing About Military Uniforms And Ranks | Writer’s Relief 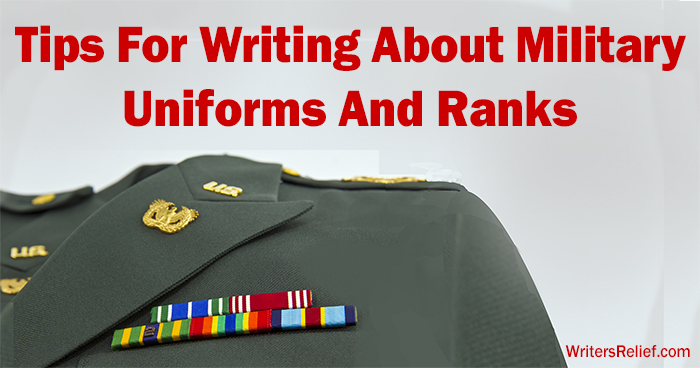 We’ve all had this happen: You’re enjoying a short story or novel when an errant, incorrect detail brings the narrative to a screeching halt. Instead of being immersed in the plot, you’re now confused and wondering what else the author got wrong. Thorough research can make the difference between a story that resonates with readers and one that flops. In honor of Veterans Day and our veterans, the experts at Writer’s Relief have put together some tips for accurately writing about military uniforms and ranks in your story or book.

Writing About Military Uniforms And Ranks: Get It Right

The Sergeant brushed the dirt off his two-chevron insignia, which clearly denoted his rank to the soldiers within the platoon he commanded.

For some readers, the errors in this sentence are glaringly obvious. And while they may seem like small details that no one would notice, the mistakes are enough to ruin the story for any reader who knows the correct wording.

For instance, “Sergeant” is not capitalized as a stand-alone word. Sergeant Roberts would be capitalized, but “the sergeant brushed the dirt off” would not have “sergeant” capitalized. And sergeants have three chevrons, not two. The insignia would indeed denote rank to all soldiers in the Army; however, not to the soldiers within a platoon this person commands. Why? Because sergeants don’t command platoons; lieutenants do.

You don’t have to be a veteran to feature elements of the military in your story. But you should ensure that what you’re saying or describing is correct. Hollywood, for example, is notorious for making movie mistakes—especially when it comes to the military. It is important for writers to double-check their work to ensure there aren’t any mistakes that can damage the story’s credibility.

Here are two areas where writers (and Hollywood) often get their military details wrong:

The uniforms of the United States military branches have changed fairly often throughout history. Since the founding of the country, the uniforms of the United States Army have undergone at least a dozen major changes and many minor changes. The Navy uniform has also undergone a multitude of changes. In order to maintain the reality of your story and keep your reader fully engaged, make sure that you have the correct uniform for the correct era. Mistakenly calling a modern Army uniform a BDU or painting a vivid naval battle scene where an officer is wearing the uniform of an enlisted person can ruin the story for many readers.

The hierarchy and insignia of ranks are an integral aspect of military structure. As with the uniform faux pas mentioned above, messing up the ranks within your story can lose you more than a few readers. It is important to remember that the ranks can differ depending on which military branch your story involves, as can their abbreviations.

The insignia identifying the ranks can also vary from branch to branch. While more than one military branch has an insignia featuring two parallel bars connected horizontally by two smaller bars, the rank it represents is different. That particular insignia is well-known from movies like Saving Private Ryan as distinguishing a soldier as a captain. But in a movie or story about the Navy or Coast Guard, a character wearing that insignia would actually be a lieutenant.

Not only are the insignia and ranks different between branches, but the abbreviations for those ranks can vary as well. A captain within the Army is abbreviated as CPT, but in the Marine Corps and Air Force, the same rank is abbreviated as Capt. The Navy and Coast Guard abbreviate the rank of captain as CAPT. And keep in mind that any fictional captains in the Army, Air Force, and Marine Corps who act too familiarly with a Navy or Coast Guard captain will be in for a rude awakening.

Thankfully, the hierarchy and details of military structure are well documented and available through a quick Internet search. By ensuring the details of your short story or novel are accurate, you’ll keep readers glued to the page instead of stopping to scratch their heads in puzzlement.

Question: What military mistakes have you caught in a story or novel?