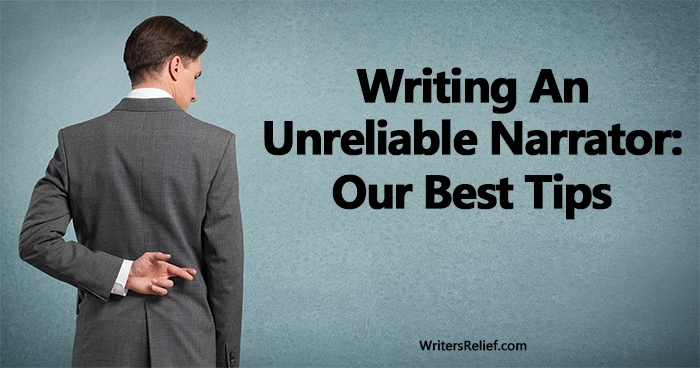 If you’re writing a short story or novel, one way to grab and keep your readers’ attention is to use an unreliable narrator: a character who misleads or lies to the reader and creates doubt in his or her ability to tell the story. At Writer’s Relief, we know when readers encounter an unreliable narrator, they are challenged to think for themselves and come to their own conclusions, bringing the experience to another level. Here are our best tips for writing an unreliable narrator.

How To Write An Unreliable Narrator

Using an unreliable narrator means adding a layer of deception to your story. What you share with your reader through your character’s perspective is their “objective truth,” but certain traits about your character, as well as specific details in the story, can clue in the reader that things are not what they seem. You can use indirect and direct characterization to create believable unreliable narrators.

The Liar: This character spins lies to create the best narrative, or the narrative they want others to believe. The Liar wants to be seen a certain way or to gain a certain outcome from the story being told. A Clockwork Orange by Anthony Burgess is a classic example: The narrator tells the story while drunk and has delusions of grandeur that don’t align with others’ reality.

The Naïve: This is usually a character who is young or lacks experience: Innocence or ignorance prevents this narrator from telling the truth. Holden Caulfield in Catcher in the Rye tells his story from the point of view of a teenager, and from inside a mental institution, which means he doesn’t fully understand some of the events he relays to the reader.

The Outsider: An outsider is somehow different from the rest of the characters in the story. The narrator may be new in town or of a different race or social status than others. In Rebecca by Daphne du Maurier, Mrs. de Winter is an outsider to her new husband and his mansion, so she is unaware of his past and his previous wife—both of which she intends to find out about.

The Picaro: Picaros like to embellish and exaggerate to create the most interesting tales. In Wuthering Heights by Emily Brontë, Nelly is knowledgeable of the events and characters she talks about, but likes to embellish and allows her own opinions to create a biased retelling of the story.

The Insane: This narrator has lost touch with reality and may consider fantasy as fact. A famous example is the narrator in Edgar Allan Poe’s The Tell-Tale Heart, who is so wracked by guilt over what he’s done, he describes his hallucinations about the heartbeat under his floor while none of the other characters hear anything.

How to Create an Unreliable Narrator

Be unreliable from the start. Establish early on that your narrator may not be trustworthy. Poke little holes in their narrative to show not everything being offered as fact is backed up by the people or the setting around the unreliable character.

Use varying levels of unreliability. It doesn’t have to be as extreme as Edgar Allan Poe’s short story. Harry Potter, for instance, while a character with good intentions, is misled several times in his books. In Harry Potter and the Order of the Phoenix, Harry rushes to the ministry believing Sirius Black is in danger, only to arrive and realize Sirius was never there to begin with.

Be mindful when using an unreliable narrator—there is a fine line between challenging your readers with select information and having them lose interest because they don’t understand what’s going on. Understanding your unreliable narrator’s wants and needs will help you create a believable character who will tell a compelling story that will thoroughly engage your readers.

Question: Who are your favorite unreliable narrators?