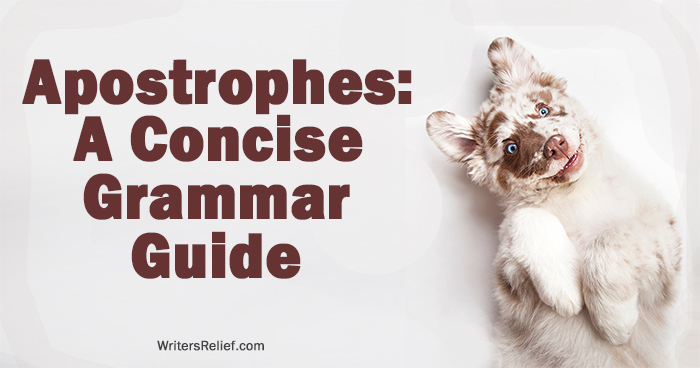 A Grammar Guide To Apostrophes

Before we talk about apostrophes, we should talk about nouns and the differences between singular and plural nouns.

Noun: A word that names a person, place, or thing.

Plural noun: Names more than one person, place, or thing. Note that these may or may not end in s! Some examples are: saxophones, theaters, people, teeth.

Apostrophes are commonly used when you want to indicate that a noun possesses or owns something.

Possessive Nouns: When To Add An Apostrophe Plus An S

Examples: the writer’s pen, the father’s joke, the building’s elevator

Bonus example: Nathan’s habit of singing opera in the morning surprised his neighbors.

Examples: the boss’s optimism, the seamstress’s thimble, the dress’s hem

Examples: the men’s race, the geese’s pond, the children’s playground

Bonus example: Shannon and Kayla hid the megaphone in the women’s restroom.

Possessive Nouns: When To Add An Apostrophe On Its Own

Examples: the trees’ leaves, the Smiths’ music, the surgeons’ tools

Bonus example: His parents’ shock was evident when a giant toothbrush was found under Desmond’s bed.

Other Instances Of Possessive Nouns

Example: Cathe’s and Vince’s cupcakes. This indicates that Cathe and Vince each have their own cupcake. (You’ll deserve a cupcake too, after reading this article!)

Bonus sentence: Seems unfair that some people get tasty cupcakes and others get tubas.

Bonus example: Ronnie and Anita’s car had “Just Married” painted on the back window.

Examples: his, hers, theirs, my, its, ours, whose, yours.

Bonus example: Wynonna told Rashell the sledgehammer was really hers.

For an acronym representing a singular noun, add an apostrophe plus an s to the end. Examples: the FDA’s label, the UK’s queen, the PhD’s presentation.

For an acronym representing a plural noun, add an apostrophe only to the end. Examples: the MDs’ prescriptions, the ATMs’ buttons.

Bonus example: Wendy threw the sledgehammer so high, it showed up on NORAD’s radar. This made it difficult for Hermine to catch.

Apostrophes are also used to shorten a word into a contraction (and designates where letters have been removed) or to show where numbers have been omitted.

If you’re still unsure about proper apostrophe placement, the proofreading experts at Writer’s Relief can help with professional formatting and proofreading. So, when Erinn visits Catherine and parks her car in Jill and Ben’s driveway, which is next to the Jones’ house and across the street from Dave’s and Cathy’s apartments, you’ll have no trouble at all conveying that information to your reader!

Question: Which of these tips do you find most helpful?