How To Include Foreign Language In Your Fiction | Writer’s Relief 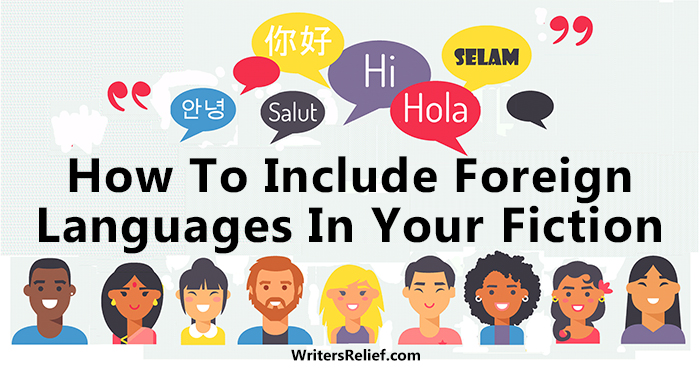 The world is filled with many diverse cultures and languages. When you’re attempting to write believable characters and settings, it’s helpful to reflect this diversity in your short stories or novel. At Writer’s Relief, we know adding layers to your characters and worldbuilding helps create a believable narrative. Here’s how to accurately and effectively include foreign language in your fiction writing.

How To Include Foreign Language When Writing

Translate as necessary. If your character can understand a language, have them translate for your reader. Otherwise, readers will lose interest because they can’t understand what’s going on. You might also use this opportunity to show readers how much your character does or doesn’t know about a culture or language, and how worldly or sheltered they may be.

Providing an immediate translation in your writing allows readers to know what was said so they can stay in the moment. For example, this exchange from All The Devils Are Here by Louise Penny:

“Yes please. And can you tell him, Fluctauat nec mergtur?”
“What does it mean?” Jean-Guy asked.

“Beaten by the waves,” said the maître d’. “But never sinks.”

Sprinkle in a few foreign words now and then. Sometimes bilingual speakers will use profanity or terms of endearment from their own language even when they’re speaking another one. Or you may have a character who has trouble coming up with the correct English words or phrases. Be sure to add context clues so that the reader won’t feel completely lost when this happens. If you’re struggling to decide if you should use a new term or not, read more here: Should You Use Uncommon Or Unusual Words In Your Writing?

Avoid simplistic descriptions when writing a big scene. It’s not very impactful to say “they argued in Japanese” during a pivotal scene in your story. You can certainly use this approach for transitional moments, but for key scenes, always show and don’t tell.

Be respectful! Don’t be afraid to consult fluent or native speakers if you need a translation or second opinion. Having an expert source will add a level of realism to your story that you might not be able to achieve on your own, and it will be immersive for your readers—especially readers who are fluent in that second language. The accuracy will make your writing more realistic.

Use italics for words not widely known in English. If you’re writing a word in Spanish, Arabic, or Klingon and it’s not commonly used in English, it should be italicized. Using italics gives your readers a heads-up that something different has occurred.

Using foreign language in your writing is a great way to make your story more vibrant and authentic. For more writing tips on how to respectfully incorporate diversity, read How To Write Characters Of Different Ethnicities Without Offending Readers.

Question: In what ways do you use foreign language in your writing?