Write Like Hemingway: What You Should Leave Out | Writer’s Relief 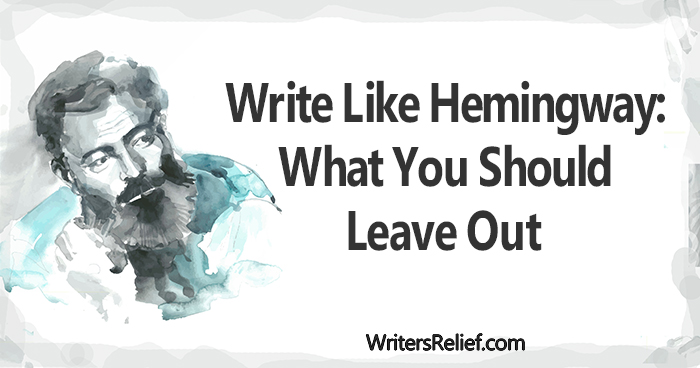 Born on July 21, 1899, Ernest Hemingway was destined to impact the world of literature with his unique writing style. His economical way with words had a strong influence on twentieth-century fiction, and today many of his works are considered classics. If you find you tend to overwrite, taking a few lessons from Papa Hemingway’s technique can help you cut back and tighten your writing. Writer’s Relief has a few tips on how to write like Hemingway and how to know what you should leave out.

A key element of Hemingway’s writing style is his conciseness. He believed writing should be impactful and drive the point home without being overly wordy. Hemingway wrote about what something is instead of what it isn’t, and he did it in as few words as possible. His carefully placed adjectives allowed for succinct sentences. Hemingway’s focus on brevity is now so distinctive, there’s even a Hemingway Editor available online that will tell you which parts of your writing should or could be condensed or eliminated entirely.

Terse and powerful writing was so famously Hemingway’s style that he’s credited with this well-known six-word story (although there is some question as to whether it’s actually Hemingway’s work): “For sale: baby shoes, never worn.” Hemingway could have written an entire novel based on these shoes and why the baby never wore them, but it’s left to the reader’s interpretation.

Write short sentences. Keep it simple. The concise statement “Christina donated money to the orphanage” has no wasted words, yet tells the same story as “The generous donor, Christina, made a donation to the orphanage.”

Use stirring adjectives. When you’re trying to tell your story in fewer words, your word choice is critical. Use words that vividly paint a picture and evoke emotional reactions in your readers. Avoid “very” whenever possible.

Know which words are worth keeping. New writers often make the mistake of saying something in ten words that can be said in two. Trimming your word count is smart (especially since more literary journals now favor shorter works over longer stories), but not if it results in the reader being unable to understand what your story is about. Don’t remove words simply for the sake of removing them—and make sure the words you do keep tell the complete story.

Say what it is, not what it isn’t. Out with the “un” prefix! Instead of writing “unhappy”—the state of being “not happy”—use the word “sad.” Don’t say “unstable” or “inconsistent” when you mean “erratic.”

Edit vigorously. In your first draft, you can simply write the story without worrying if you’re using too many words. But when you’re ready to start editing and polishing your work, break out the red pen and show no mercy! As Hemingway said about his own writing: “I write one page of masterpiece to ninety-one pages…I try to put the [rest] in the wastebasket.”

Question: Which tip will you use to write more like Hemingway?