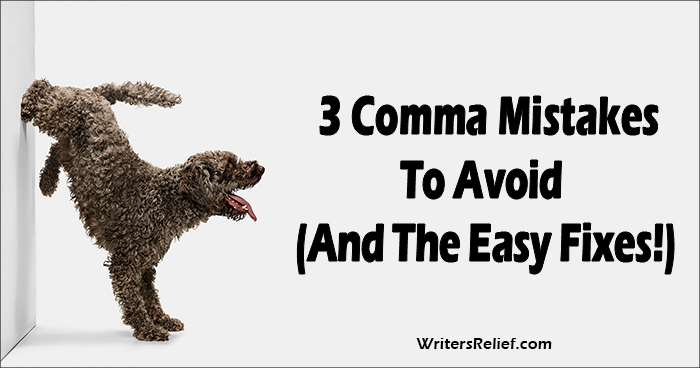 Let’s pause briefly (get it?) to consider the comma. While the comma is one of the most common types of punctuation—it’s also one of the most misused. As the grammar police sit stakeout behind a paragraph on Run-On Road, a sentence missing much-needed commas will whiz by when it should be pumping the brakes. Other times, a sentence stuffed like a clown car with way too many commas will crawl slowly, painfully along. Thankfully, the grammar gurus at Writer’s Relief have tips on how to avoid the most common comma mistakes and offer the fixes you need to know.

3 Comma Mistakes And The Easy Fixes

Unnecessary Commas: Who Let All These Commas In?

Some writers follow the “it feels like a pause should be here” rule when placing commas. But this line of thinking can result in too few commas or too many, depending on how often the writer feels the need to take a breath. Instead, there are actual grammar rules that dictate whether or not a comma is necessary.

Commas should not separate a verb from its subject.

Incorrect: Brooke’s box of fire-breathing chameleons, was placed next to the door.

Correct: Brooke’s box of fire-breathing chameleons was placed next to the door.

Note: A verb would be preceded by a comma only if that comma is one of a pair framing a parenthetical phrase.

Commas should not separate a verb from its direct object.

Incorrect: Erinn knew then, what the fire alarm meant.

Correct: Erinn knew then what the fire alarm meant.

Comma Splice: This Run-On Should Be Run Off!

A comma splice creates a type of run-on sentence. This occurs when a comma is incorrectly used to connect two independent clauses. These clauses should instead be separated into two sentences, linked by a semicolon, or linked by a conjunction.

Note: A comma would be used before “but” only if the two clauses could be independent sentences. This leads us to our next common comma mistake. And also leads us to wonder what Brooke has against goldfish.

Commas Before All Coordinating Conjunctions: And Yet…

Writers sometimes assume a comma should always appear before certain words: and, but, for, nor, or, yet, so. However, a comma should only be used when the coordinating conjunction is connecting two independent clauses that could stand on their own as sentences. If they cannot, then a comma should not be inserted.

The phrase “never mastered the skill” is NOT an independent clause, so a comma is not required. This article can help you identify whether or not your clauses are independent. And Bailey shouldn’t feel bad—goldfish is a difficult language to learn. It’s all about how you shape the bubbles.

The Oxford comma, also known as the serial comma, is the comma used after the penultimate item in a list of three or more things before the word “and” or “or.” When a sentence includes a series of people, places, or things, using the Oxford comma makes it clear just how many items you are listing and resolves any potential confusion or ambiguity. Without the Oxford comma, you may inadvertently suggest a connection between the last two items listed that does not actually exist.

Example: Brooke went for a stroll with her new pet alligators, Nathan and Pat.

Without the Oxford comma, it would seem that Brooke has finally chosen less flammable pets and named them Nathan and Pat. But we happen to know Nathan and Pat, and we are almost 100% certain they are not alligators.

Oxford comma example: Brooke went for a stroll with her new pet alligators, Nathan, and Pat.

Aha! Now we see that Brooke is walking her pet alligators, while non-alligators Nathan and Pat accompany her from a safe distance. And it is also clear that Brooke still has questionable taste in pets.

Pause And Think When Using Commas

These are the most common comma mistakes that writers make—fortunately, they are all easy to fix! For more great grammar tips and advice, be sure to check out this article: Writers: Get The Best Grammar Tips And Answers—Ask Writer’s Relief!

Question: What is the most common comma mistake you’ve seen?