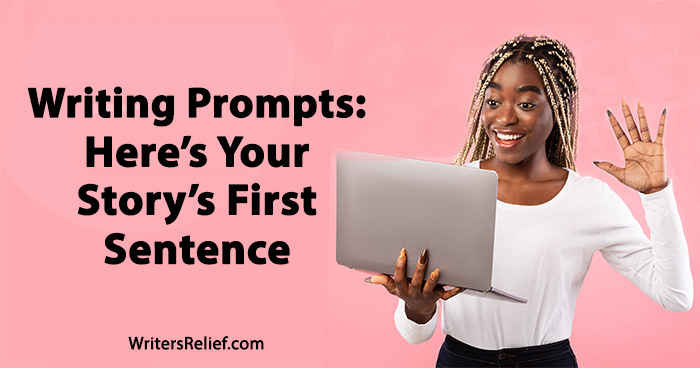 Writer, if you want to be inspired by something a little more challenging than typical writing prompts, try this! The publishing experts at Writer’s Relief know the first few sentences can make or break your short story or novel. This is where you need to capture your audience’s attention and intrigue them enough to continue reading. It’s important to learn how to write a great first line, but this time, we’ve done the work for you! Try these first sentence writing prompts and write the sentences you feel would come next.

We were the last two people on earth, but we couldn’t speak the same language.

As rain pounded against the cabin’s window, the man’s last candle began to flicker out.

Kayla was claustrophobic and hated bright colors, so when dozens of clowns began boarding the already crowded bus, it was the last straw.

Stuck on the roof of the office building without a cell phone, Vince tried waving to cars on the roadway below.

Recently engaged, Catherine never expected her sixth-grade boyfriend to show up at her door twenty years later to say that they had technically never broken up.

It was the end of the world—again.

After the last incident, we knew Grandpa would be banned from the grocery store.

The town had been without rain for three years, but now the clouds were starting to look gray.

The ballet was beautiful, but I had tickets to see a heavy metal band, so I was pretty sure I was in the wrong theater.

The fog machine at Shannon’s party was stuck on full blast.

Daniel was excited but also concerned to see he had 250 new text messages on his phone.

I clung to a large piece of debris and continued floating down the flooded street.

Walking through the doorway, we emerged in a different time.

After everything that happened, I’ll never be able to look at peanut butter and jelly sandwiches the same way.

The man sitting beside Joe on the train looked more like a homeless person than a bounty hunter.

Someone had to be let go from the company, and Pat had to make the final decision.

It had been five years since his husband went missing, so Dave was shocked to see him sitting in the café.

Dear reader, I wish I could tell you where I am.

I had grown accustomed to living next door to aliens.

The doctor told me I had amnesia, but I couldn’t remember what that was.

Bringing home the stray cat seemed like a good idea at the time.

We opened the ice-cream shop on Tuesday, and the third Ice Age began on Wednesday.

The bluegrass band needed a new jug player, and I happened to own a good jug.

Question: Which first sentence writing prompt will you try first?