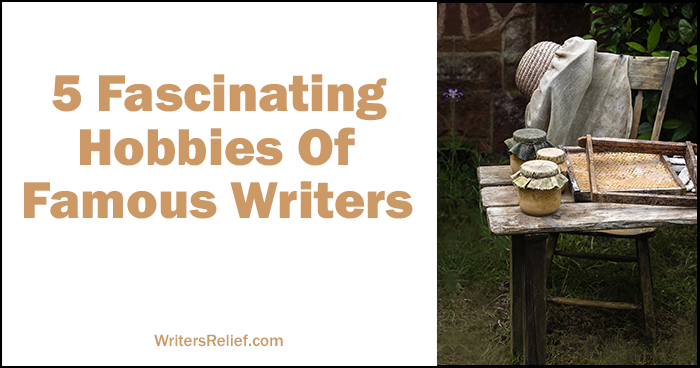 When you picture famous writers like Sir Arthur Conan Doyle, Agatha Christie, or Leo Tolstoy, your mind’s eye probably has them scribbling away at their next great book. But what do writers do when they’re not…writing? The research experts at Writer’s Relief took a few moments to uncover the unexpected, fascinating hobbies of a few famous writers.

Emily Dickinson: Dickinson was an accomplished baker. She won second prize in the 1856 Amherst Cattle Show for her round loaf of Indian and Rye. And Dickinson wrote numerous drafts of her poems on kitchen papers…including a wrapper from a Parisian baking chocolate!

Arthur Conan Doyle: The Sherlock Holmes author began playing cricket in school and continued participating in the sport for over thirty years. According to the Arthur Conan Doyle Encyclopedia, he played in 412 matches for more than fifty different teams. Conan Doyle often played cricket with other writers, including J. M. Barrie, the creator of Peter Pan!

Agatha Christie: Christie developed a passion for archaeology after a trip to Baghdad. How did she get there? On the Orient Express, of course! It was during this trip that she met her future husband, Sir Max Mallowan, whom she would later accompany on archaeological digs.

Leo Tolstoy: The War and Peace author was an avid chess player. Tolstoy learned how to play the game when he was just a young boy. Snippets about him in chess magazines reported that he and his family were quite passionate about chess—his pets were even named after chess pieces!

Sylvia Plath: Plath’s father was an entomologist who specialized in bees. At one point, Plath and her husband decided to become beekeepers. Before Plath passed away, she wrote a series of five poems about bees.