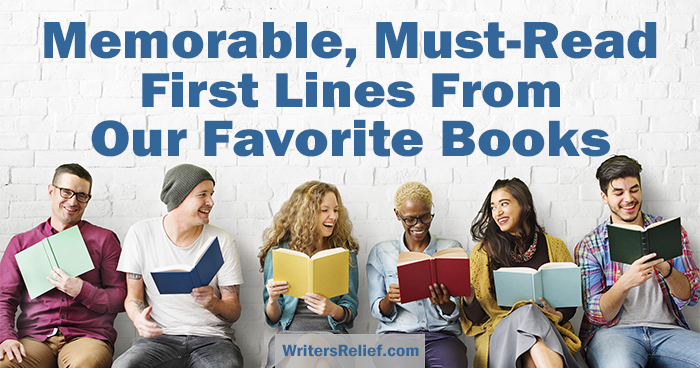 Whether it’s a beloved classic or a brand-new bestseller, the best books grab your interest with the very first line, drawing you into the story. If you’re looking for your next great read, the bibliophiles at Writer’s Relief have compiled a list of opening lines that are sure to send you running to the nearest bookstore or library. Here are the most memorable, must-read first lines from our favorite books.

The Best First Lines From Our Favorite Books

The man in Black fled across the Desert, and the Gunslinger followed.—The Gunslinger, Stephen King

A mile above Oz, the Witch balanced on the wind’s forward edge, as if she were a green fleck of the land itself, flung up and sent wheeling away by the turbulent air.—Wicked: The Life and Times of the Wicked Witch of the West, Gregory Maguire

Many years later, as he faced the firing squad, Colonel Aureliano Buendía was to remember that distant afternoon when his father took him to discover ice.—One Hundred Years of Solitude, Gabriel García Márquez

Szeth-son-son-Vallano, Truthless of Shinovar, wore white on the day he was to kill a king.—The Way of Kings, Brandon Sanderson

This is a story about a man named Eddie and it begins at the end, with Eddie dying in the sun.—The Five People You Meet In Heaven, Mitch Albom

The night Effia Otcher was born into the musky heart of Fanteland, a fire raged through the woods just outside her father’s compound.—Homegoing, Yaa Gyasi

Far out in the uncharted backwaters of the unfashionable end of the Western Spiral arm of the Galaxy lies a small unregarded yellow sun. Orbiting this at a distance of roughly ninety-eight million miles is an utterly insignificant little blue-green planet whose ape-descended life forms are so amazingly primitive that they still think digital watches are a pretty neat idea.—The Hitchhiker’s Guide to the Galaxy, Douglas Adams

Question: What’s your favorite first line from a book or novel?