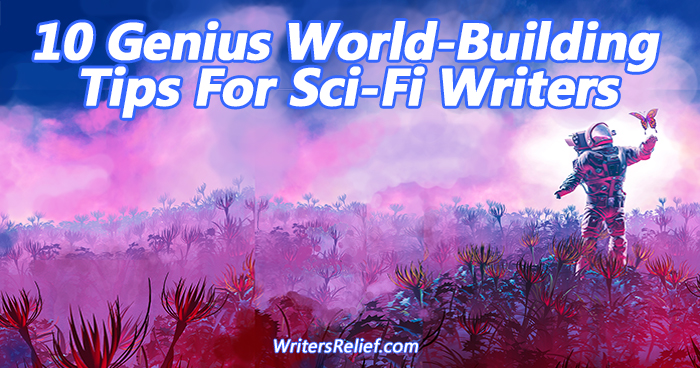 If you write science fiction or fantasy, the sky’s the limit for developing your characters’ world—and if your story isn’t set on Earth, even the sky isn’t your limit! But “anything goes” doesn’t mean you don’t have to have some sort of consistency, logic, or guidelines in the setting you create. Sci-fi readers are sticklers for accuracy, even if the book is grounded in fantasy. Here are the best world-building tips from the sci-fi and fantasy (SFF) geniuses at Writer’s Relief.

Predetermine every detail—and we mean every detail. Though some writers prefer to fly by the seat of their pants rather than plot their stories, detailed plans are a speculative fiction writer’s best friend. You’ll want to create lists, notecards, or documents to track all the different elements of the world you want to develop. Based on how your story progresses once you start writing, you might decide to eliminate or change some of these details. However, these blueprints will be very helpful when you’re creating a world that is built solely by your imagination.

Define your genre. There are important differences between science fiction and fantasy: science fiction often includes futuristic technologies based on those we use now, whereas fantasy usually includes mystical or magical elements. And don’t forget the subgenres! Fantasy subgenres include urban fantasy set in a city (whether real or imagined); epic fantasy set in a totally fictional world; and contemporary fantasy that’s more grounded in realism, with just a few magical or fantastical elements. Dystopian is an example of a speculative fiction subgenre, which is often futuristic or post-apocalyptic in a world of great suffering and injustice. Each genre and subgenre will require building a completely different type of world.

Decide whether or not you need a map. If your world is one you’re creating from scratch—or even a fantastical world based upon a real place—you may want a physical representation of it to help yourself keep track of where your characters are at any point in their travels. Readers will also refer to your map to better understand the story and character motivations.

Consider your characters’ vocabulary and language. Fantasy and science fiction writers are famous for their creativity when it comes to words. J.R.R. Tolkien, author of the Lord of the Rings books, created his own language—complete with multiple dialects! Even if your characters don’t speak a unique language, they might have certain terminology that’s specific to their world. The inhabitants of a desert world will have different words and references than those who live on a planet of water. These details will help your world feel more three-dimensional and tangible. Keep in mind, if you’re going to include new, world-specific words in your writing, you must also define them for your readers.

Set the governing rules of your world. In addition to the specifics of your characters’ day-to-day lives, consider your SFF world’s “big picture.” How is this world governed? What are the societal norms and laws your characters live by? Regulations, especially those affecting everyone, are often taken for granted by those who live in a given world. So even if they won’t be explicitly discussed in your story, these background details are important and will translate into a more developed world for your story or novel. For example, government was incredibly important in Suzanne Collins’s series The Hunger Games.

Know your world’s history. Readers won’t necessarily need to know every detail of how a character’s world came to be—exposition can be tricky. But elements like recent wars, new settlements, or regime changes can provide context for your world’s current events. Consider these questions: Within your world, what event was the catalyst for the story you’re writing, and what history does the reader need to understand to fully grasp the significance?

Imagine your characters’ environment. What does your character’s daily life look like? What objects are around them? What structures or buildings exist? Also consider the emotional and cultural environments too! What does society look like, and how do characters interact? What do they do for entertainment? Do any sports or games exist in this world? Are there any customs the characters may take for granted, but your readers need to know about in order to fully understand the world? The answers to these questions will help you create a realistic, three-dimensional world for your characters.

Use sensory details. Get creative and go beyond simply describing how the world looks—what do your characters typically hear and smell? Using all the senses, especially when describing the details of fantastical battle scenes—or of a freshly cooked meal—can help ground readers in your world.

Connect to other elements of your story. Though the setting is very important—especially for science fiction and fantasy writing—it doesn’t exist in a vacuum. Even the most detailed SFF world won’t help your story if readers can’t connect with your characters. And reading about fascinating characters in an imaginative world can still fall flat if your story has a saggy middle. A great story arc and engaging characters are just as important to your story’s success as the world you build for them.

And One Of Our Most Important World-Building Tips Is…

Keep a master document! In speculative fiction, it’s important to maintain continuity and keep all your world’s details consistent between scenes—and this is even more crucial if you’re planning to write a series. Take a page out of J.K. Rowling’s very successful books and make yourself master lists for everything you can think of: a rough dictionary for your characters’ language and grammar rules, maps, a list of minor characters, and relevant rules and laws.

It’s easy to lose track of all these details when you’re in the throes of writing, but if you follow these guidelines and tips, your readers will be convinced you’re a creative, world-building genius!

Question: What do you consider to be the most important detail in speculative fiction worlds?