10 Grammar Rules You Can Break—And Maybe Should! | Writer’s Relief 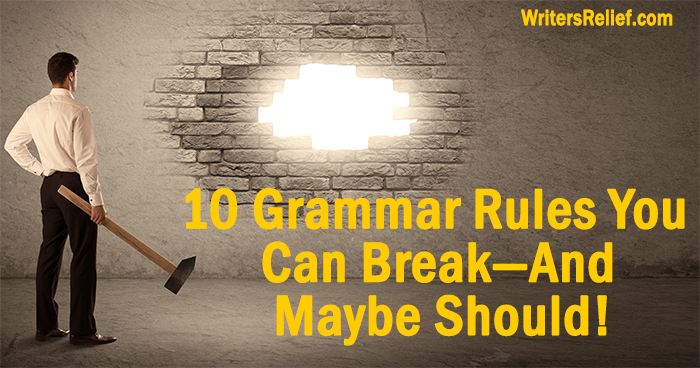 For many writers, grammar rules are trusted guides through the sometimes murky world of creative writing. If you want to be a good writer, you should follow the rules, right? Well, put down that red pen and close your style guide, because the grammar gurus here at Writer’s Relief know that sometimes you can—and even should—break grammar rules. GASP! Yes, it’s true! There are more than a few grammar guidelines that, contrary to popular belief, aren’t written in stone.

10 Grammar Rules You Can Break (Sometimes!)

Pretentious and stuffy: From where did this candy come?

Better: Where did this candy come from? And who ate all the Kit Kats?

Contractions. While the worlds of formal English and academia frown upon the use of contractions, they are perfectly acceptable in less formal writing like blog articles and creative writing. If you’re writing dialogue, you want it to sound natural and reflect the way the characters speak—not like they swallowed a grammar guide.

Fewer than five sentences in a paragraph. Many of us were taught all paragraphs should be roughly equal length and contain no fewer than five sentences. But in creative writing, it’s often more natural to let your paragraph lengths vary in your short story. If your writing will appear online, shorter paragraphs are easier to read on a mobile device and will hold your readers’ interest better than large blocks of text.

Using They as a singular pronoun. You may have learned that they is only a plural pronoun used to refer to a group of people—but the world is constantly evolving, and so is the English language. If you are writing about a person who uses they as their pronoun (rather than he or she), it is correct and inclusive to use it. And if you are referring to a single person whose gender is not specified, you can use the pronoun they according to APA style and even Merriam-Webster.

Example: What will happen to the person if they admit to eating all the Kit Kats? I’m just curious.

Double negatives. While this has long been a grammatical no-no, double negatives are perfectly okay if you are writing dialogue. Ain’t nothing wrong with being authentic to a character’s way of speaking—sometimes, without a double negative, you can’t get no satisfaction!

Split infinitives. The infinitive form of a verb starts with to—for example, to go or to be. In the Victorian era, grammar experts decided that infinitives should never be split, and some of today’s grammarians might still agree. Remember, language isn’t static; it’s constantly changing! And every once in a while, a split infinitive simply gets the message across better. It’s time “to boldly go” into a future where diehard Trekkies split infinitives without fear of repercussions.

Slang. Whether or not to use slang in your writing will depend on the context. You’d be perfectly correct to wear sneakers with jeans or shorts, but try pairing those high-tops with a ball gown or tuxedo at your cousin’s fancy wedding and see how fast you earn a scornful glance from Aunt Gertrude. The same is true for using slang, which is by definition informal. If you have characters who are speaking in a casual dialect or are using it to create a certain mood in your poetry, then slang is completely appropriate. But if you’re writing a formal essay or a wedding invitation, slang should be avoided. Can you dig it?

Well or Good. If you ask some grammarians the question, How are you, they will insist the only correct answer is I’m well. In this case, well refers to being in good health. But I’m good is also acceptable, since it can refer to your overall sense of being.

Example: You ate fifty-six Kit Kat bars! How are you? I’m good, thanks. And also very full.

Use Your Best Judgment

We’re not saying you should break grammar rules all the time—that would be grammar anarchy! But if it makes sense for your writing, it’s okay to break a rule now and then.

Question: Which grammar rule do you break most often?