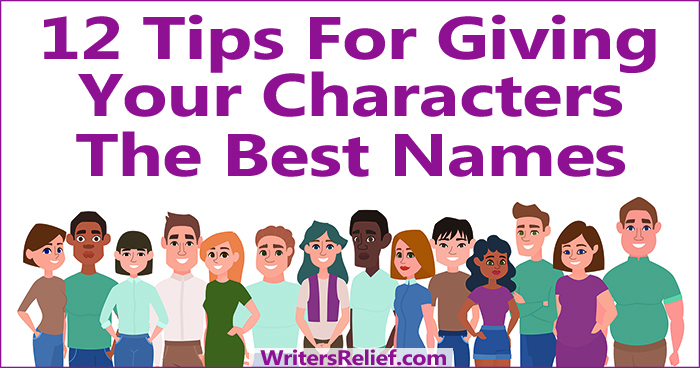 In fiction, a name helps readers form an image of what a character looks and acts like. If you don’t believe us, try picturing Frodo Baggins with the name Mycroft Holmes, or Darth Vader as Atticus Finch. At Writer’s Relief, we know the right names can help your readers really connect with the characters in your short story or novel. And depending on how many characters are in your story, you might have to come up with a lot of names! Use these strategies and tips to give your characters the best names and make them more real and memorable for your audience.

What To Consider When Giving Your Characters Names

Time frame: In creating the right world for your story or book, the appropriate names are important. Mildred was a popular girl’s name in the 1920s, but you won’t find many parents giving that name to their daughters today. Tybalt is a great name for a medieval knight, while Zyla is more suited for a warrior living on Mars in the future.

Age: Some names seem more suited to older characters, while others feel more modern and better fit a young character. Aunt Edna will seem older than Aunt Susie. And as we mentioned earlier, keep in mind the names that would have been popular when your character was born.

Personality: Is your character no-nonsense with a dry sense of humor? A simple, short name might fit best. If your character is elaborate or showy, a more intricate name will help reinforce this trait. For instance, what kind of character does the name Digby Beaumont call to mind? Complete a character study for each of your characters to really know their personalities before you name them.

Parents: If your character’s parents play a vital role in the story (even if they are absent, like Harry Potter’s parents, James and Lily), think about what they would name their child, and what that choice might mean. Assuming your character is using the name their parents gave them, this could be a fun and creative way to come up with the perfect name!

Genre: In fiction, each genre has its own unique rules. If you’re writing science fiction or fantasy that features a unique jargon, you’ll want to reflect that element in your characters’ names. For a contemporary romance, you’d pick names that are more likely to sound like people your reader could be friends with.

Meaning: When you’re having trouble coming up with a name, think about the character’s chief qualities. Then choose a name that has that meaning. For instance, Kella is a name of Irish origin that means “warrior,” while Jamal is Arabic for handsome. You could also choose a name that embodies something your character would find significant.

Where To Find Character Names

Baby name books. Rather than trying to think up names off the top of your head, use a baby name book, which offers you a great resource and starting point. It will put hundreds of names at your fingertips, along with their meanings and origins.

Google. Want to know the most popular names in a given year, or to search for names by their histories and meanings? A quick Internet search will gather all that information for you in seconds! Random name generators are always fun to try too.

Movies and TV shows. Still can’t settle on the perfect character name? Consider giving a nod to one you’ve loved in another medium! Think back to characters who stand out from movies, TV, or plays.

Cemeteries. This may seem a bit morbid, but consider browsing old graves for characters’ names—especially if you’re writing a historical piece and need a name that’s accurate for a specific time period.

Places you’ve visited. The names of towns or landmarks can make great names for characters! If there’s a particular place that’s important to your character’s backstory, this is an angle to consider. Your wealthy entrepreneur who grew up in New York City might fittingly be named Madison.

Day-to-day life. Writers are expert eavesdroppers—when you’re people watching or when you happen to overhear a conversation, make note of the names you hear. You may come across a gem to save for later!

Once you’ve decided on a name for your character, give it a test drive. Then, after you’ve written a few scenes, go back and read your story to see if the name works. Does it suit the character? Are you envisioning someone who looks as you hoped? If yes, yay! Keep writing! But if your character’s appearance or actions don’t seem to mesh with the name you’ve chosen, maybe you want to consider another name. After all, Holly Golightly from Breakfast at Tiffany’s was named Connie Gustafson in the first drafts!