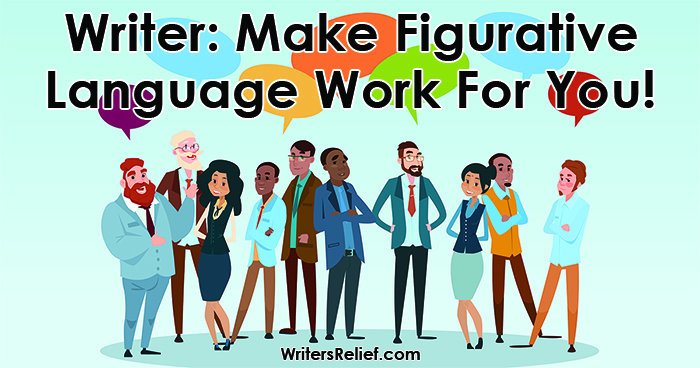 Simile. Many of us know this one: A simile compares two things, using “like” or “as.” For example, the descriptive statement “Jordan’s eyes are as blue as the ocean” is a simile!

Metaphor. This is another way to compare two things, but not with the words “like” or “as”; rather, the writer says that one thing is another, but is understood not to be talking literally. To stress how ancient something is, you could say, “Carol’s computer is an old dinosaur.”

Apostrophe. When using an apostrophe, a writer directly addresses a person, thing, or concept. One of the most classic examples? “Twinkle, twinkle, little star, how I wonder what you are?”

Personification. A writer may also personify an inanimate object by treating it as though it were living. Personification is actually a type of metaphor! The common phrase “Opportunity came knocking” utilizes personification.

Onomatopoeia. Besides being a tricky word in spelling bees, onomatopoeia is a word that makes the sound it describes, such as “boom,” “buzz,” or “clang.” You see a lot of onomatopoeia used in comic books! Ka-pow!

Hyperbole. A hyperbole is exaggeration for dramatic effect. David saying, “I’m so hungry I could eat a horse” is an example of hyperbole. Even if David does have a very healthy appetite.

Allusion. When using an allusion, a writer makes a reference to a well-known person, place, thing, or event. Alluding requires the audience to use their own background knowledge to understand the meaning, but can be very powerful when done right! For example: “After weeks of watering and pruning the flowers and vegetables, Wynonna’s yard became a Garden of Eden.”

Idiom. An idiom is a phrase or expression that isn’t taken literally, but your reader understands the meaning. “You hit the nail on the head” means you are correct. And “Break a leg, Dave!” is a wish for good luck onstage—not a threat of bodily harm.

Paradox. A paradox is a statement that seems to contradict itself, but can in fact be true. “You have to spend money to make money” is great business advice—and also a paradox!

Litotes. With litotes, something positive is expressed by the negative of its contrary. For example, if we ask Vince how he’s doing today and he replies, “Not bad,” he’s saying, I’m good.

Metonymy. When using metonymy, a writer replaces a word or phrase in their sentence. The replacement is another word with which the original is closely associated. Take, for example, the famous phrase “The pen is mightier than the sword.” Here, pen refers to the written word in general, and sword to military force and physical fighting.

Synecdoche. Synecdoche is similar to metonymy: A writer replaces a word or phrase, but in this case specifically refers to an object by the name of its part. When Catherine refers to her Lamborghini as “my wheels,” this is a synecdoche—wheels are parts of a car, not the whole thing.

Anastrophe. An anastrophe involves rearranging a sentence’s normal word order. To use this figurative device, you would write, “Smart, he was not,” when the normal order of the sentence would be “He was not smart.” (A master of this, Yoda was!)

Question: Share an example of a sentence using one of these figurative language devices!