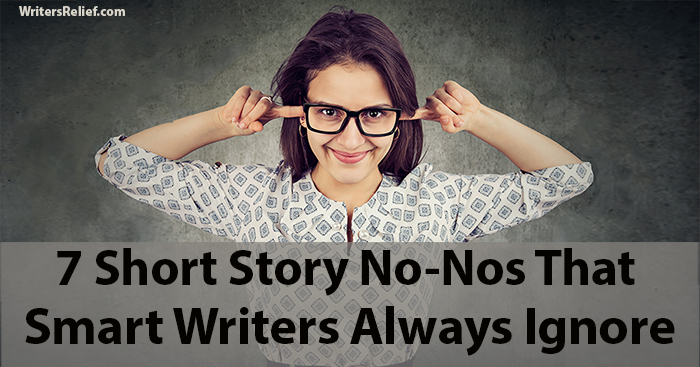 Sooner or later, every short story writer comes across a list of writing pitfalls that are considered narrative poison. Include these elements at your own peril, you’re warned. But at Writer’s Relief, we know that many of these rules are not chiseled in stone—some are actually the literary equivalent of urban legends. While we can’t help with the alligators living in NYC sewers, we can help debunk a few short story writing myths. In fact, you might want to try a few of these short story no-nos when you’re writing!

Short Story No-Nos You Can Ignore

At some point, every writer has heard some variation of “don’t use adverbs; use a stronger verb.” And it’s not necessarily bad advice. “She sprinted to the door” is a stronger phrase than “she moved quickly to the door,” and readers would much rather hear what he “shouted” than what he “said loudly.”

So when would we use adverbs? That’s simple: when they have something to add. “He smiled widely” could be replaced by “he grinned” or “he beamed,” but “he smiled mournfully” changes the context of the action entirely. When you use an adverb, it shouldn’t just modify your verb—it should modify the way your readers understand the action.

Is there a better word for what you’re trying to say? Well, maybe. Some words can tighten up your writing by conveying more information at once, but they also require more work from your reader. Your protagonist’s love interest may be pulchritudinous, but not everyone will know what you’re saying. And if readers have to jump out of your story every five minutes to consult a dictionary—you’re going to quickly lose your audience.

Using simple, plain language can be more effective. After a harrowing chase, your secret agent sits on a cliff watching the sunrise with her son. She’s experienced a lot of complicated emotions in the last twenty-four hours, and now that the danger has passed, she can finally relax. You could say she’s ecstatic or relieved or hopeful, and those would all be true. Or you could say she’s happy, which encompasses all of that and more. In cases like these, you can make use of a simple word’s non-specificity to invite your readers into the story and let them take it in the direction that makes the most sense to them.

Dialogue can be tricky, even for established professional writers. If you try to mimic real-life dialogue, you may find that your characters quickly get offtrack and your plot stalls. While trimming down your first draft, it may be tempting to cut all the lines that distract from the main plot of your story—but that’s not always the best idea. Idle dialogue can be a good way to explore other aspects of your story, like character and setting. Letting your detectives discuss their home lives may not help them find the murderer they’re searching for, but it might inform the audience on why this case is so personal for them. Too much irrelevant dialogue can bog down a story, but before you start deleting, try broadening your idea of what makes dialogue relevant.

No Large Casts of Characters!

Ensemble casts are often a tough sell, especially in a short story where you’re limited to 3,500 words or so. The more characters you have, the more perspectives there are for both you and your readers to keep up with. It’s easier to keep your cast as small as possible—but is it always better?

That depends. Each character has their own perspective and can offer you some flexibility in telling your story. But make sure you’re not including characters who don’t add anything important to the plot.

Short story writers get lots of advice about beginnings. According to various experts, you shouldn’t start with dialogue, or with a description of nature, or in medias res (in the middle of the action), or any number of other ways. It almost makes you wonder how you ARE allowed to start your story!

Guess what? Any of these “no-no” beginnings can be done quite well. The purpose of the beginning is to introduce the primary characters and a conflict. A few snappy lines of dialogue that lead into a description of a problem your character is facing can do a lot to grab your readers’ interest and pull them into the story.

After the Twilight series was published, a swarm of writers tried to cash in on that cultural explosion with their own vampire romance novels. The market became oversaturated quickly, and it’s become almost taboo to pitch that type of plot. So should you never try to copy what’s successful in the market?

Not exactly. Drawing inspiration from contemporary releases can be a good strategy! The trick is to include your own twist on the idea. Instead of writing the next iteration of Bella deciding between Eddie and Jake, maybe this time your protagonist leaves both of them and chooses a third option. Or maybe she doesn’t need a love interest! It’s up to you—take the original inspiration and make it uniquely your own.

This writing advice is almost a cliché itself. Every writer has to produce something original, so they shouldn’t draw on this pool of overused phrases and concepts, right? Not always! “Cliché” is really just a fancy writer term for a shortcut. The readers understand what you want to say because of how the phrase has been used in the past.

Overuse of these shortcuts might make the reader feel cheated, as if the writer didn’t put much effort into developing the idea. However, clichés can be useful for filling in your background. If your character states it’s raining cats and dogs, your readers immediately know that it’s a downpour, not a drizzle. Using clichés can also give quick insights into the character using the phrase. If your hero responds to bad news with “when life gives you lemons, make lemonade,” your readers will see him as someone who always tries to make the best of a situation, rather than someone who’s easily discouraged. In a short story, sometimes it’s helpful to say more with fewer words.

It’s always a good idea to try different techniques when writing a short story. However, the warnings about these styles and devices aren’t worthless. All of the techniques we’ve mentioned here require special attention to ensure they’re being used correctly—if you’re not careful, they could make your story sound dull, hackneyed, and simplistic. But when used well, these no-no’s might lead to a literary editor accepting your short story submission with a Yes! Yes!

Question:Which of these no-nos do you ignore?