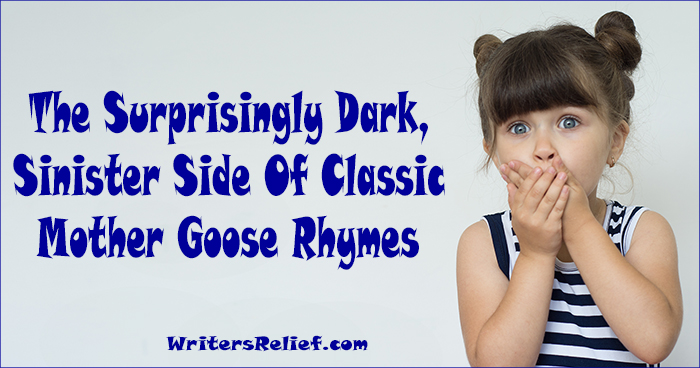 May 1 is Mother Goose Day, a time when many adults and children celebrate by reading and reciting their favorite nursery rhymes. But did you know that underneath the façade of innocent children’s verse, the investigative reporters and true crime aficionados here at Writer’s Relief have uncovered the shadowy (but still fluffy) underbelly of Mother Goose rhymes? The startling truth: These well-known ditties weren’t originally meant for little ears. In fact, there’s a surprisingly dark, even sinister, side to many classic Mother Goose rhymes!

Ring Around The Rosie

One of the more popular Mother Goose rhymes, this one encourages children to hold hands, dance around in a circle, and fall down. Well, many of us fell down as adults when we were told that this nursery rhyme was supposedly linked to illness. But, AHA! Not so fast!

Ring around the rosie,

We all fall down!

You’ve probably been told that “rosie” stands for the rosy cheeks and rashes of the ill, and the “pocket full of posies” is about the sweet-smelling herbs people used to carry around to ward off sickness. But surprisingly, this common interpretation is not supported by scholars. In fact, modern folklorists believe that in this case, a rose is just a rose. So this nursery rhyme’s supposedly sinister meaning has now been debunked.

Ah, this is the perfect poem to recite while sitting at the window on a rainy day. But what are the clues really trying to tell us?

It’s raining, it’s pouring,
The old man’s snoring.
He got into bed
And bumped his head
And couldn’t get up in the morning.

Our research shows this poem probably originated in England, where, let’s face it, it’s almost always raining. The old man most likely suffers a concussion and therefore can’t get out of bed. How does this happen? Is he jumping into bed from the top of the cupboard? There’s some thought that this nursery rhyme was originally about an accidental death, but the jury’s out on the “accidental” nature—you’d have to be lying down with a lot of force for this to happen. Time to call in the forensic team!

Here’s a sweet vision of a baby rocking gently to sleep. Yet, if you pay close attention to the lyrics, something seems to be amiss.

Some researchers believe this is the first nursery rhyme written in America. “Rock-A-Bye Baby” first appeared in print in Mother Goose’s Melody in 1765. Whether it was inspired by a family who lived in a tree house, or a Native American lullaby, or was a metaphor for the English political climate in 1688, this baby could definitely use a rock-climbing helmet and harness—and maybe a parachute.

This sounds like a straightforward cautionary tale for children: If you’ve climbed too high, you may fall from your perch and get hurt. But let’s crack the case of this nursery rhyme.

One premise about the origin of this nursery rhyme alludes to the very unpopular King Richard III’s fall from a horse during battle, which resulted in his death. Humpty Dumpty was also the nickname for an alcoholic drink—which too much of could certainly result in someone falling down. But how did Humpty end up as an egg? Our hard-boiled detectives couldn’t find the answer.

How Much Wood Could A Woodchuck Chuck

This Mother Goose rhyme is also a tongue-twister! And anyone who’s flubbed a tongue-twister will vouch for the sinister, devious nature of this type of verse. It also begs the question that had our research team scouring through dusty files: Who wants to know?

How much wood could a woodchuck chuck

If a woodchuck could chuck wood?

As much wood as a woodchuck could chuck,

If a woodchuck could chuck wood.

As it turns out, a woodchuck would chuck about one cubic meter of wood. Maybe the woodchucks are just angry about being woken up by the paparazzi on Groundhog Day—who could blame them?

There are many more Mother Goose rhymes with dark origins. Now that our ace literary detectives have uncovered the secrets hidden in these children’s verses, we’re ready to put our skills to work decoding the latest true crime documentary—or better yet, helping you research the best markets for your short story, poetry, personal essay, or novel!

NOTE: While we’ve mentioned a few of the possible historical origins of these nursery rhymes, there are many potential explanations for what nursery rhymes might mean and how they were created.

Question: Which is your favorite Mother Goose nursery rhyme?